Lasers Write False, Fearful Memories into the Brains of Flies 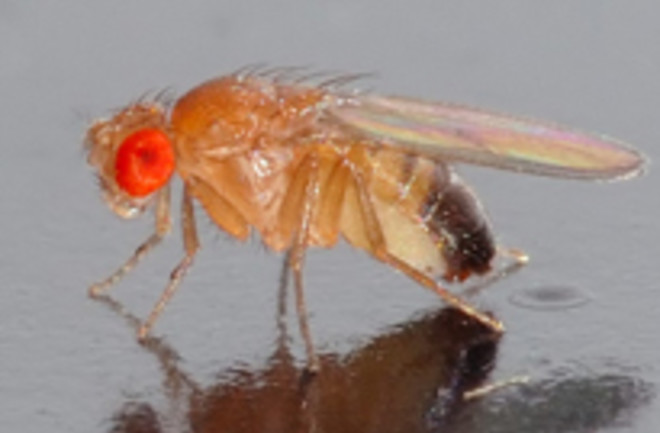 It sounds like a scene from an insect version of Total Recall: Using genetically engineered fruit flies and laser beams, researchers have found a way to embed false, fearful memories in the flies. Researchers first tested normal flies in a chamber where a jets of air on either side brought two different odors into the container.

The researchers delivered an electric shock each time a fly strayed into a particular odour stream, which taught the flies to prefer the other one: the flies learned to move in the direction of the shock-related odour 30 per cent less often [New Scientist].

Next, the researchers created a strain of genetically engineered flies with certain neurons that would be activated by a laser blast. Lead researcher Gero Miesenböck explains that with this technique, called optogenetics, researchers can

use light to activate particular cell types that have been genetically engineered to express a light-responsive protein. When laser pulses hit the brain, cells expressing the light-sensitive protein activate. "It's like sending a radio signal to a city but only those houses with a radios set to the right frequency will get the signal," says Miesenböck [Nature News].

these flies feared that smell as if they had been conditioned to associate an electric shock with it. "Stimulating just these neurons gives the flies a memory of an unpleasant event that never happened," he says [New Scientist].

In the genetic engineering process, the scientists had tweaked different neurons in different groups of flies. The contingent that did react to the laser all had 12 particular light-sensitive neurons, according to the study published in the journal Cell. Those 12 brain cells may be the root of associative learning, researchers say--at least in flies. Related Content: 80beats: Neuroscientist Says Torture Produces False Memories and Bad Intel 80beats: Your Eyes Reveal Memories That Your Conscious Brain Forgot 80beats: Heart Attack Meds Could Remove the Bad From Bad Memories 80beats: Eternal Sunshine of the Spotless Mouse: Scientists Erase Mice’s Memories