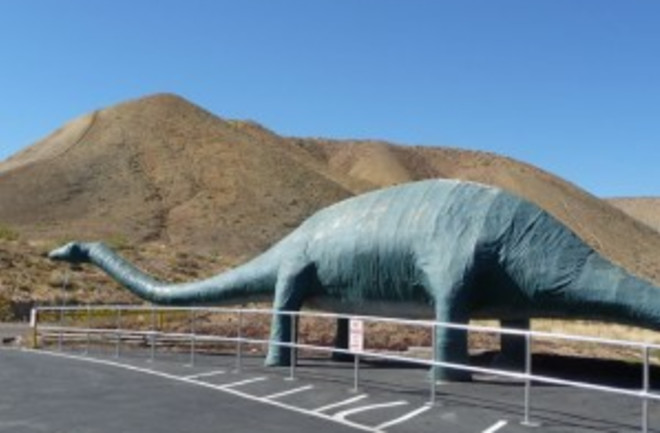 Dinosaur National Monument. photo by George Johnson I figured no one would expect a book about cancer to start with a dinosaur, so that is how I decided to begin The Cancer Chronicles. Early on in my research I had run across an occasional mention of a dinosaur that had been diagnosed with cancer. The evidence consisted of a single fossil -- a tumor petrified inside a bone. That is about all the information that was readily available, but as I tracked down the story, I learned the fascinating details. The fossil had been discovered in a Colorado rock shop by a vacationing physician, who immediately suspected that he was looking at a case of prehistoric cancer. He bought the rock and added it to his collection. His initial diagnosis -- osteosarcoma -- turned out to be incorrect. An expert on dinosaur disease, Bruce Rothschild, later concluded that the tumor had all the markings of a metastatic bone cancer, one that had traveled to the skeleton from elsewhere in the body. His short report, “Metastatic Cancer in the Jurassic,” was published in The Lancet in 1999. I packed up my Jeep and drove north from my home in Santa Fe to northwestern Colorado for a glimpse at the terrain where the fossil had been found. I had already spent months probing the edges of the vast, deep jungle of cancer research, wondering how to present it in a book of finite size. It would be another three years until I was done. But now I had found a way in. As I’ve written here before, it is not surprising that cancer existed far back in time. Dinosaurs, like people, are metazoans -- creatures put together from trillions of individual cells. In the beginning, life was much simpler -- unicellular. And in fact most of the biosphere today, by far, still consists of single living cells -- bacteria, protozoa, and the simplest algae and fungi. The mandate for any life form is to multiply and spread its genes far and wide. In the primordial scum, one strain of bacteria might acquire a genetic mutation that gave it an edge. It could divide more quickly into two cells or use nutrients more efficiently. It would reproduce faster than its neighbors, until it met up with another strain of bacteria with equal or greater reproductive and survival powers. The two would compete for the finite resources of the puddle. Or they would cooperate. (This phenomenon has been studied in the laboratory, as described by this paper in PNAS from Robert Austin’s Princeton lab.) The same drama is played out among the cells that make up every metazoan since the Cambrian Explosion, when multicellular life began. In an evolutionary compromise, cooperation among cells must prevail over competition. But it is a constant struggle. When one lineage of a creature’s cells becomes dominant at the expense of the rest, we call it a malignancy. I didn’t start to really understand cancer until I thought of it this way -- as a deeply rooted, inevitable, unfortunate consequence of evolution. Genes must be free to mutate or life would have never begun. As cells banded together to form metazoans, an intricate system of checks and balances had to emerge -- cells sending signals to other cells telling them to slow down. Inside the cells enzymes emerged that could scan the genome for damage and repair it. Mechanisms evolved that would limit the number of times a cell could divide. But the process cannot be perfect -- eliminating mutations altogether -- or there would be no life. Nothing would evolve. All of this is played out in a world whose dominating force is entropy -- the second law of thermodynamics, the certainty that order inevitably gives way to randomness, that any complex arrangement of parts, like the cells that make up a dinosaur or a human, will become increasingly disorganized over the span of time. It is remarkable that our own species has evolved eyes and fingers and brains that sometimes catch a cancer in the making, early enough to treat it. We will continue to get better at this as decades go by. But there will not -- and cannot -- ever be a cure, a way to eliminate cancer to the extent that we have eliminated many infectious diseases. The universe doesn’t work that way. @byGeorgeJohnsonThe Cancer Chronicles is reviewed by David Quammen in the New York Times Book Review. For a preview, please see the book's website.