Is the Purpose of Sleep to Let Our Brains "Defragment," Like a Hard Drive?

Neuroskeptic is a neuroscientist who takes a skeptical look at his own field and beyond at the Neuroskeptic blog.

Why do we sleep? We spend a third of our lives doing so, and all known animals with a nervous system either sleep, or show some kind of related behaviour. But scientists still don’t know what the point of it is. There are plenty of theories. Some researchers argue that sleep has no specific function, but rather serves as evolution’s way of keeping us inactive, to save energy and keep us safely tucked away at those times of day when there’s not much point being awake. On this view, sleep is like hibernation in bears, or even autumn leaf fall in trees. But others argue that sleep has a restorative function—something about animal biology means that we need sleep to survive. This seems like common sense. Going without sleep feels bad, after all, and prolonged sleep deprivation is used as a form of torture. We also know that in severe cases it can lead to mental disturbances, hallucinations and, in some laboratory animals, eventually death. Waking up after a good night’s sleep, you feel restored, and many studies have shown the benefits of sleep for learning, memory, and cognition. Yet if sleep is beneficial, what is the mechanism? Recently, some neuroscientists have proposed that the function of sleep is to reorganize connections and "prune" synapses—the connections between brain cells. Last year, one group of researchers, led by Gordon Wang of Stanford University reviewed the evidence for this idea in a paper called Synaptic plasticity in sleep: learning, homeostasis and disease. This illustration, taken from their paper, shows the basic idea:

While we’re awake, your brain is forming memories. Memory formation involves a process called long-term potentiation (LTP), which is essentially the strengthening of synaptic connections between nerve cells. We also know that learning can actually cause neurons to sprout entirely new synapses.

Yet this poses a problem for the brain. If LTP and synapse formation is constantly strengthening our synapses, and we are learning all our lives, might the synapses eventually reach a limit? Couldn't they "max out," so that they could never get any stronger?

Worse, most of the synapses that strengthen during memory are based on glutamate. Glutamate is dangerous. It’s the most common neurotransmitter in the brain, and it's also a popular flavouring

: “MSG”, monosodium glutamate. But in the brain, too much of it is toxic. Glutamate works as a transmitter molecule by opening channels on the cells that receive it. The channels allow calcium into the cells on the receiving end, which activates them, allowing messages to go through. But too much glutamate can cause excess calcium to build up inside the very cells that receive the message, a harmful process called excitotoxicity. So, if our brains were constantly forming stronger glutamate synapses, we might eventually run into serious problems. One function of sleep, according to the theory, is to protect the brain against excitotoxicity or other “synaptic overload” problems by pruning the synapses. If the brain is essentially removing the "extra" synaptic strength formed during the previous day, it must do so in a way that preserves the new information. One possible mechanism for this is synaptic scaling

. After some of the neural connections into a given cell, or "inputs," become stronger, then all of the synapses on that cell could be weakened. This would preserve the relative strength of the different inputs, while keeping the total inputs constant. It's as if each neuron were a cup, and each synapse corresponds to a different liquid. During the day, memories form and certain synapses get stronger, which means pouring more of those particular liquids into the cup. At night, synaptic scaling pours some of the mixture back out, bringing it back to the baseline level without changing the relative proportions of the mix. We know that

synaptic scaling happens in the brain, but it's not yet clear whether it has anything to do with sleep. This is an area of ongoing research. While synaptic scaling seems to treat each neuron like a cup to be kept from overfilling, the effect of sleep on for the brain overall may be more like disk defragmentation, according to this idea. After heavy use, hard disks tend to get "fragmented." This is because when data gets stored, it is written to wherever there happens to be free space on the disk. This makes it inefficient to keep track of it all as files may be split and written in many different places. A defrag consolidates the same data into a more logical order. Defragmentation is a taxing chore for the computer, so many people schedule it to happen overnight. In the same way, sleep may serve to reorganize and reconsolidate memories. The mechanics of how this defragmentation works remain unclear; synaptic scaling might be just one of several processes at work. Defragmentation is not an exact analogy, however. The process could also be likened to archiving your emails to make room in your inbox, or compressing data into zipped files, to free up room on the disk. (This theory is specifically about slow-wave sleep (SWS). It doesn’t try to explain rapid eye movement (REM) sleep, when dreams happen. Interestingly, some animals do not have REM, but they all have SWS. In some animals, like dolphins

, only one side of the brain has it at a time, which is strong evidence that SWS, but not REM, is vital for life.) So what's the evidence? A number of studies in simple animals, like flies and zebrafish, have shown that synaptic strength and density is increased in sleep-deprived animals, compared to recently rested ones. Wang and colleagues showed some examples of synaptic proteins from the brains of Drosophila, the fruit fly: 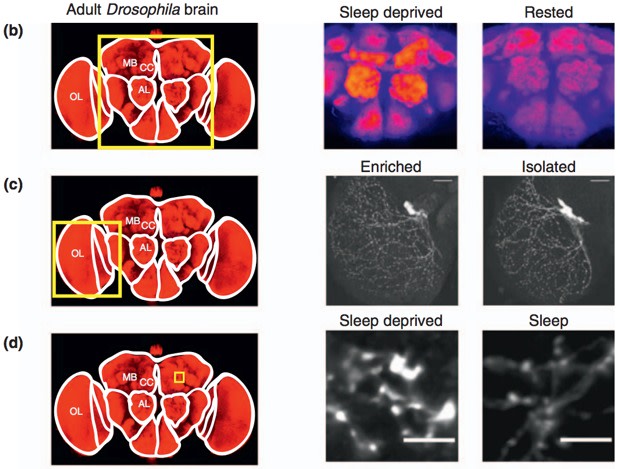 What about mammals, specifically us humans? In February 2012, Italian researchers Reto Huber and colleagues of Milan provided the first human evidence in a paper, Human Cortical Excitability Increases with Time Awake. Huber’s team measured the excitability of the brain when people were well rested and then looked to see how it changed as they were kept awake for over 24 hours.

The volunteers awoke at 7am on day 1 of the study, and were then kept awake all of that day, all of the subsequent night, and all of day 2. The excitability measurements spanned a period of 30 hours, from 9am to 3 pm the next day. The subjects finally got to go to sleep on the next night, and one final session took place on day 3.

The results showed a steady increase in brain excitability with increasing time spent awake. Sleep put this back to normal—mostly. Excitability was measured using electroencephalography (EEG)

. Essentially, they hit the brain with a strong magnetic pulse from a coil held up against the head, and measured the electrical activity that this triggered in the brain. The graphs below show what happened: the TMS pulse caused an electrical response with three peaks: up, down, up, all in the space of 30 milliseconds. This represents the firing of different groups of cells. The magnitude of the response was increased when people were sleep-deprived (red lines), compared to when they were well rested: 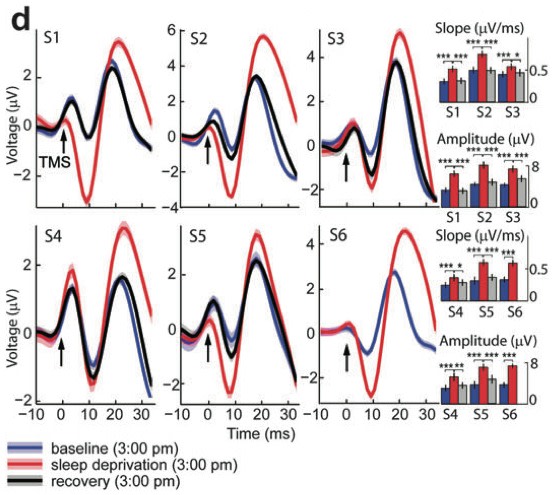 Although it was a small study, all six participants clearly showed higher stimulation-evoked potentials after sleep deprivation. Although the exact causes of the TMS evoked response are unclear, this is consistent with the idea that synapses become steadily stronger during wakefulness, and are pruned during sleep.

If this is true, it also raises questions for neuroscientists because it means that the time of day that an experiment takes place could have an impact on the results. Whether the test subjects are animals or humans, if they’re tested at the end of long period of wakefulness, their brains might be more excitable.

There are still many questions around the function of sleep, but one thing seems certain: we won’t be able to understand the brain if we limit ourselves to thinking about what happens when we’re awake.