Is It Time To Redraw the Map of the Brain?

A provocative and important paper just out claims to have identified a pervasive flaw in many attempts to map the function of the human brain. University College London (UCL) neuroscientists Yee-Haur Mah and colleagues say that in the light of their findings, "current inferences about human brain function and deficits based on lesion mapping must be re-evaluated." Lesion mapping is a fundamental tool of modern neuroscience. By observing the particular symptoms (deficits) people develop after suffering damage (lesions) to particular parts of the brain, we can work out what functions those various parts perform. If someone loses their hippocampus, say, and gets amnesia, you might infer that the function of the hippocampus is related to memory - as indeed it is. However, there's a problem with this approach, Mah et al say. Conventional lesion mapping treats each point in the brain (voxel) individually, as a possible correlate of a given deficit. This is called a mass univariate approach. The problem is that the shape and location of brain lesions is not random - some areas are more likely to be affected than others, and the extent of the lesions varies in different places. What this means is that the presence of damage in a certain voxel may be correlated with damage in other voxels. So damage in a voxel might be correlated with a given deficit, even though it has no role in causing the deficit, just because it tends to be damaged alongside another voxel that really is involved. Mah et al call this problem 'parasitic association'. In a large sample of diffusion-weighted MRI scans from 581 stroke patients, the authors show that the co-occurrence of damage across voxels leads to systematic, large biases in mass univariate deficit mapping. The biases follow a complex geometry throughout the brain: as this lovely (but scary) image shows - 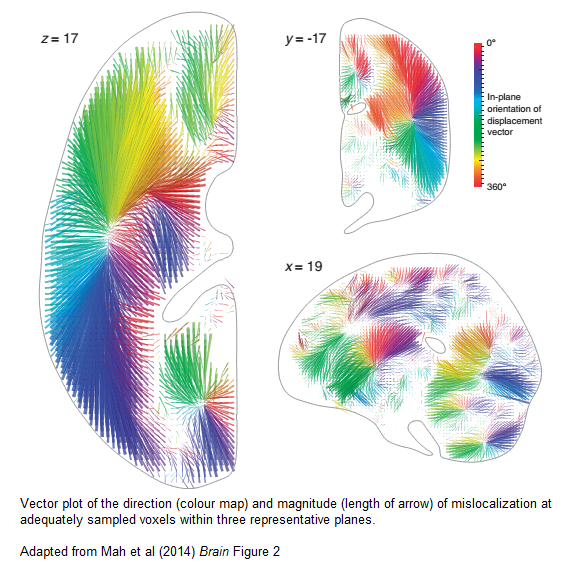 This shows the direction and magnitude of the error that would afflict a standard attempt to localize a hypothetical deficit that was truly associated with points throughout the brain. In some areas, the bias 'points' forward, so the deficit would be wrongly mapping as being further forward than it really was. In other places, it points in other direction. The mean size of the expected error is 1.5 cm, but with a high degree of variability, so it is much worse in some areas. Worse yet, Mah et al say that in cases where the same deficit can be caused by damage to two, non-adjacent areas, univariate lesion mapping might fail to pinpoint either of them. Instead, it could wrongly implicate a nearby, unrelated area. The authors conclude that the only way to avoid this problem is by using multivariate statistics to explicitly model voxel interrelationships, e.g. a machine learning approach. This will require large datasets, but they caution that merely having a big sample, without multivariate statistics, would achieve nothing. They conclude on a somewhat downbeat note:

It is outside the scope if this study to determine the optimal multivariate approach: our focus here is on the evidence of the misleading picture the mass-univariate approach has created, and the need to review it wholesale. Taken together, our work demonstrates a way forward to place the study of focal brain lesions on a robust theoretical footing.

I'm not sure the outlook is quite so bleak. It's a very nice paper, however, Mah et al's dataset is purely based on stroke patients. Yet there are many other sources of brain lesions that are used for lesion mapping: tumours, infections, and head injuries to name a few. These kinds of lesions probably throw up parasitic associations as well, however, they might be very different from the kind seen in strokes. This is because strokes, unlike other kinds of lesions, are always centered on blood vessels. Mah et al note that the bias map they found is clustered around the major cerebral arteries and veins, but the obvious conclusion to draw from this is that it's only applicable to strokes. Whether other kinds of lesions produce substantial biases remains to be established. Until we know that, we shouldn't be rushing to redraw any maps just yet.