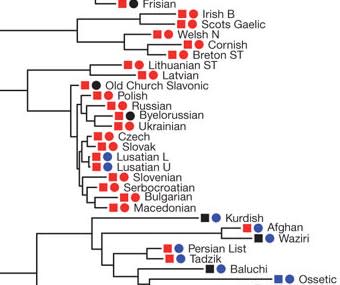 , look out: If language has any universal grammar

, it's hiding really well, conclude the authors of a recent Nature study

. The idea that all human languages share some underlying structure, regardless of where or when they evolved, an influential idea that nonetheless has drawn some

since Chomsky popularized it in the 1950s. One part of natural-grammar theory is the idea that certain word order rules (whether the verb or the noun goes first and whether a preposition goes before or after a noun, for example) will always associate together, regardless of which language they occur in. But when cognitive scientists and a biologist teamed up to see whether there were shared patterns in word order across four large language families, they found almost none. A common cultural background, they found, was the best predictor for how a language orders words. How the Heck: