Is Everything Old New Again?

Scientists debate whether brain cells are created throughout life. 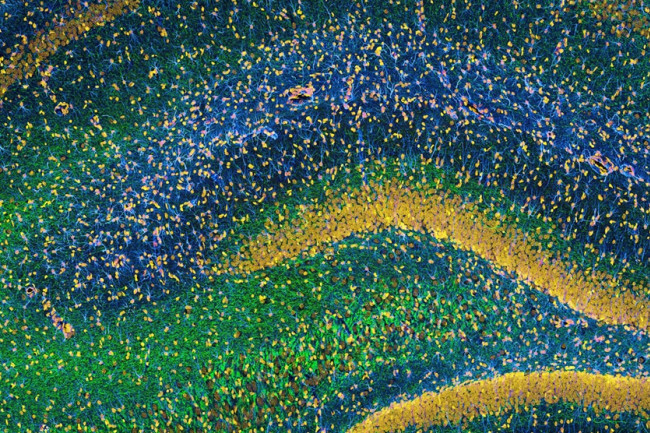 A microscopic view of a rat’s brain reveals different types of cells. Whether the human brain can produce new neurons in adulthood is still up for debate. (NCMIR/Tom Deerinck/Science Source)

Once you become an adult, it’s all downhill for your neurons: You can lose them, but you can’t gain any more. That was the prevailing theory until research over the last two decades convinced scientists that older brains do create new neurons — a process called neurogenesis. Neurons are added to two regions of the brain, most notably the hippocampus, where they may contribute to the region’s role in learning and memory. Or maybe not: The neurogenesis debate was recently reignited. In Science Smackdown, we let experts argue the evidence.

The Claim: Not a Single New Neuron

In a March paper in Nature, researchers at the University of California, San Francisco said they couldn’t find any evidence of adult neurogenesis. “If it happens, it is a very rare phenomenon,” says Arturo Alvarez-Buylla, senior author of the paper and a developmental neuroscientist at UCSF.

Using a staining technique that highlights proteins only present in new neurons, the researchers identified neurogenesis in tissue samples from fetuses and infants, validating their technique. But the number of new cells sharply fell through childhood, and they found no new neurons in adult brains. If neurogenesis occurs at the level others claim, “we would expect to see many, many of them in many different regions,” says Alvarez-Buylla.

The Counterpoint: Hundreds a Day

Not even one month later, a paper in Cell Stem Cell stated the opposite: Up to hundreds of neurons are added daily throughout adulthood. Maura Boldrini, author of the paper and a neurobiologist at Columbia University, says her team stained for similar proteins, but preserved the brain tissue with a more consistent method and preserved the samples faster, ensuring proteins didn’t degrade.

They also examined the entire hippocampus, while the UCSF group studied only three hippocampal slices from each brain. Furthermore, Boldrini verified that her subjects didn’t have psychiatric disease or have medication, drugs or alcohol in their systems, which can affect neurogenesis. Without this patient history, “I was a little surprised [the other group’s] conclusion was so strong,” she says.

Alvarez-Buylla counters that Boldrini’s staining may be labeling other types of cells. But he doesn’t mind the controversy. “Progress comes out of this disagreement,” he says. “We are both trying to look for the truth.”