Is America Less Mentally Healthy Than A Chilean Jail?

The average prison inmate in Chile has better mental health than the average American citizen, according to an eyebrow raising report just published. Researchers Adrian Mundt and colleagues ran a random survey of 1000 participants from among Chile's 47,000 prisoners. Fieldworkers went into the prisons and aimed to determine rates of DSM-IV diagnoses. They found that the 12 month prevalence of any mental disorder in the Chilean prisoners was 26.6%. One in four. That sounds high. But in psychiatric epidemiology, high is relative. A 12-month prevalence 26.6% is higher than the most recent comparable data from the Chilean general population, slightly (22.2%) But 26.6% is quite a bit lower than the 12-month figure for the general population of the USA - 32.4% according to the National Comorbidity Survey Replication (NCS-R) study, which used the same CIDI instrument and assessed the same set of diagnoses. 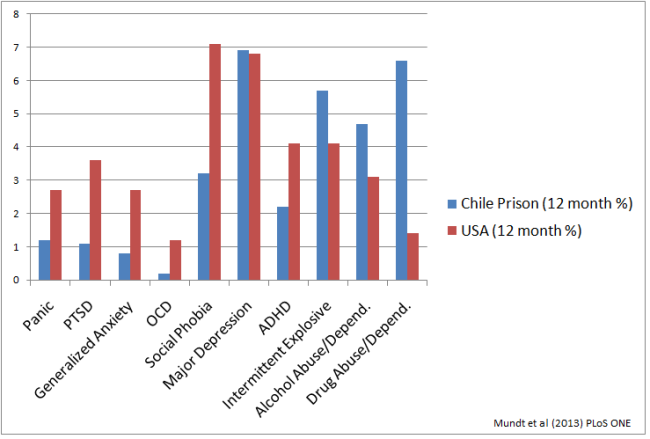 So, taken at face value these data are a sad reflection on the nature of American society, but should we take them in that way? Probably not. I've written extensively on the problematic nature of mental health surveys like this. For example, I once showed that across different countries, rates of estimated 12-month mental illness don't correlate with national suicide rates (an observation later published in a peer reviewed article...by someone else.) This casts doubt on how meaningful they are as a measure of psychiatric disorder if we make the reasonable assumption that all other things being equal, more mental illness means more suicide. I wrote that the surveys might be biased by cultural factors:

The surveys do seem to measure something, but I don’t think it has much to do with mental illness. This is just a guess but I suspect they’re measuring willingness to talk about your emotional life to strangers. At least stereotypically, the Chinese and the Japanese [very low reported rates of mental illness] are known as more reserved in this regard than Brazilians and Americans [very high rates]. So it’s no surprise that when you ask people a load of personal questions, the “rates of mental illness” seem to be lower in Japan than in America. This doesn’t mean Americans are really more ill, just more open.

I do not know much about the culture of Chilean prisoners, but I'd imagine that they're not enormously fond of disclosing their feelings to strangers. Or, maybe, they have a different set of standards for what constitute feelings that are out of the ordinary and worth reporting (a different personal yardstick of normality). So the '27%' for Chilean prisoners might not be a point on the same psychological scale as the '32%' from US citizens. This is all speculation, of course. But the authors of this paper don't even speculate about it. They compare their results to results from prisons in other countries, but they don't consider general populations. They discuss why Chile's prisons are different to Iran's, but when it comes to the whole of US society, they don't seem to find the comparison interesting.