Is AI More Common Than Biological Intelligence Across the Universe?

In a recent article, Search for Extraterrestrial Intelligence (SETI) astronomer Seth Shostak makes an intriguing claim: SETI should start pointing its telescopes toward corners of the known universe that would be friendly not just to intelligent aliens but to artificial alien intelligence. The basis of his suggestion is that any form of life intelligent enough to generate the kinds of radio signals that SETI is looking for would be "quickly" superseded by an artificial intelligence of their creation. Here, going on our own rate of progress toward AI, Shostak suggests that this radio-to-AI delay is a small handful of centuries. These artificial intelligences, not likely to have had the "nostalgia module" installed, may quickly flee the home planet like a teenager trying to pretend it isn't related to its parents. If nothing else, they will likely need to do this to find further resources such as materials and energy. Where would they want to go? Shostak speculates they may go to places where large amounts of energy can be obtained, such as near large stars or black holes. 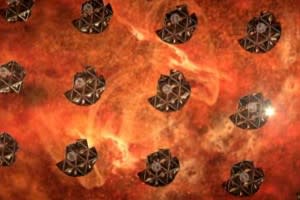 Stephen Hawking imagines aliens covering stars with mirrors to generate enough power for worm holes Stephen Hawking has suggested one reason to go to high-energy regions would be to make worm holes through space-time to travel vast distances quickly. These areas are not hospitable to life as we know it, and so are not currently the target of SETI's telescopes searching for signals of such life. In the same article, Shostak also makes the argument that since biological intelligence is a short stepping stone to artificial intelligence, "the majority of the intelligence in the universe could well be artificial intelligence." There's clearly a missing premise here, which is that biological intelligence means an intelligence that invents radio or TV, or more broadly speaking, technology. But this is clearly false. From cuttlefish to corvids, the scientific evidence for high levels of intelligence in non-human animals is rapidly accumulating. At the moment, it's not even clear that the invention of technology will be good for us as a species: an analysis of nine planetary boundaries within which human life can flourish shows that we are now transgressing three of these. Given that life has flourished for billions of years, for this to happen with just a few thousand years of agriculture and a few hundred years of industrialization shows that the step from advanced technology to artificially intelligent descendants roaming the galaxies is not one to be taken for granted. In any event, given we can't look everywhere, should thoughts about AI inform where we look? I don't think so. First, based on our very limited experience, only Homo sapiens, just one of tens of millions of species of life on Earth, have developed technology. Were it not for our species, it's unclear whether technology would ever have come about on Earth. Second, it's far from obvious that our species will have the maturity to survive the power of our achievements for more than a blink of evolutionary time--the development of AI that leaves this planet, or at the very least serious efforts toward space colonies, is probably our best hope for long term survival--but we may not get there. Perhaps the situation is no different for other forms of life that have developed technology. They will have all emerged from a Darwinian primordial soup, a soup where certain vicious and short-sighted traits will have been essential to survival. Third, it would probably be both more successful and more scientifically useful to adjust our search strategy to improve the chances for finding extraterrestrial life, rather than intelligence. My personal favorite for such a tweak to our search strategy is to look for places that have the hallmarks of increasing entropy. All forms of life take in energy that has some degree of entropy and re-emits it with increased entropy, such as heat. For our biosphere, we absorb sunlight and reflect heat, which appears as a "red edge" in the spectrum of reflected energy. The same, incidentally, seems likely to be true of artificial intelligence: it will require energy such as electric power, which will be radiated at higher entropy, such as the heat of integrated circuits. Sean Carroll has written an excellent explanation of the red edge in one of his postings over at Cosmic Variance. If we build better red edge detectors, we will both improve our chances of finding the much more common non-technologically savvy forms of life in the universe, and as an added side benefit, we might just detect the much rarer roaming AIs out there -- although, as Hawking suggests, we may want to avoid hailing them down for coffee.