Intuitively, there just shouldn't be any way for something wind-powered to move directly downwind faster than the wind itself. It's impossible: Release a balloon, and the wind blows the balloon as fast as the wind is moving, and that's as fast as any wind-powered object can go, before the wind. Sure, sailboats can win a race against the balloon by moving diagonally across the wind, but moving in a straight line down a 10 kph wind, and the balloon moves at 10 kph. End of story. Or, start of story. Rick Cavallaro and John Borton have built a cart that moves 2.86 times the speed of the wind, moving straight downwind. That may seem impossible, but after a year of tinkering and some financial assistance from Google and Joby Energy, they did it. Don't believe me? Check out the video. Keep a weather eye out for the green flag at 0:35. Notice how it's blowing the exact opposite direction of the orange wind socks on the cart? That's because the cart is going faster than the wind. How is it possible? That's the mind bending part, and even Borton and Cavallaro admit that it's kind of a brain twister to grasp the physics involved. But after a half hour on the phone, they managed to teach me the rudiments of what's going on. The key to it all is the difference between relative air speed and actual ground speed. Let's go back to the balloon. The balloon propelled by the 10 kph wind is moving at 10 kph along the ground, but it's relative air speed is 0 kph. It's moving the same speed as the wind. Ok, now bring the cart back. 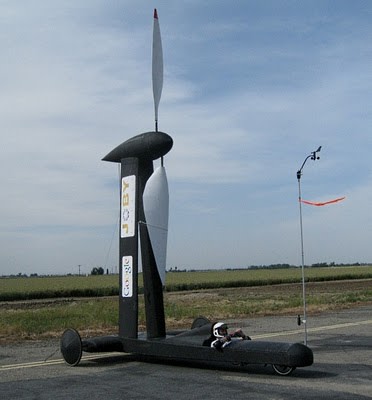 The Blackbird, lined up at New Jerusalem runway in Tracy, Calif. The cart is quite aerodynamic, so it makes a crappy sail, but it's still a sail. The wind gives it a push, and the car starts to roll, however slowly. As it moves along the ground, the wheels turn. At 0 kph the cart has an air speed (relative to the 10 kph wind) of -10 kph. As it gets rolling, it will catch up to the wind in velocity: at 5 kph ground speed, it has a -5 kph relative air speed, and at 10 kph ground speed, it has a relative air speed of 0 kph. At 10 kph ground speed, the cart is just like the balloon, and would not beat the balloon in a race. But unlike the balloon, the cart has a 17-foot propeller linked by a complicated drive train to the wheels. And it's the wheels that provide the work to turn the propeller. Remember that: The wheels turn the prop. Not the wind. Not magic pixie dust. The wheels turn the propeller. That's important. At 0 kph air speed, the propeller, sections of which have already been pulling on the car, really begins to bite on the air. It pulls the car forward exactly as a propeller pulls an airplane forward. The ground speed of the car increases, turning the wheels faster, which turn the propeller even faster, adding yet more acceleration. And now the whole project seems ridiculous,because everyone knows a perpetual motion machine is impossible. But the wind never stops adding power to the system. Come back to the difference between the relative air speed and the ground speed. In the example, the cart reaches a ground speed of 10 kph, and relative air speed of 0 kph. The propeller kicks in and the cart accelerates: Ground speed rises to 20 kph, with relative air speed of 10 kph; then 30 kph ground speed with relative air speed of 20 kph, then it finally reaches a top speed of 28.6 kph, with a relative air speed of 18.6 kph (meaning, going 18.6 kph faster than the wind). There's some loss to friction and to the drive train, but generally the wheels are always doing 10 kph-worth more work then the propeller, because the propeller is pulling through air that's already moving of its own accord (Cavallaro and Borton like to compare this to how a boat driving down river moves faster than a boat in still water). That difference in work is where the extra energy enters the system, allowing the cart to move faster than the wind directly before the wind. If that was totally baffling, don't worry, you're in good company. Cavallaro and Borton have worked with some of the finest minds in aerodynamics to develop the cart, and they've been put down as morons by other, equally fine minds. But the cart works. The two men got into the project as an academic exercise, a kind of proof of concept with no real application. But they've since realized they designed and built a device that extracts an extraordinary amount of energy from the wind, indeed, far more than any stationary wind turbine currently dotting Texas or the seas north of Germany. Borton said their cart derives 23 horsepower at top speed, roughly four times the theoretical maximum and seven times the amount of work a traditional wind turbine gets. They've formed a company, called Thin Air Designs, to try and tap the commercial potential of their cart. Tapping that power will be a trick--the cart has to move, after all, and as cool as the visual would be of carts zipping along the salt flats to power Las Vegas, the high voltage power lines they'd need to transmit the power into the grid would be no joke. But it's a fascinating application from something everyone said should be impossible. Image and video courtesy of Thin Air Designs.