If the Cylons made solar panels, the panels would assemble themselves 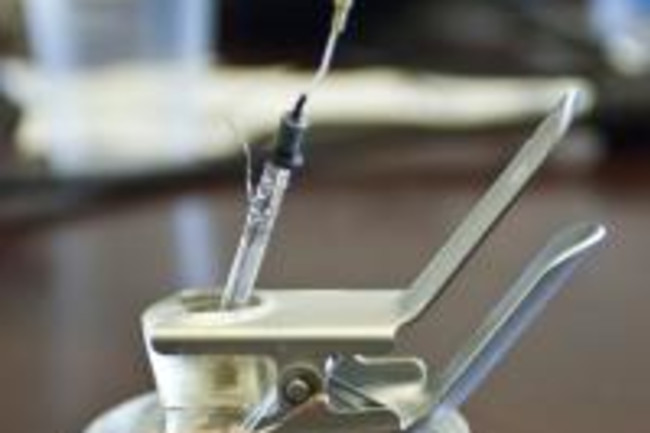 In the fifth season of Battlestar Galactica, the Cylons gave the Galactica a kind of spray-on bacteria that could make the walls self-healing. Any race of beings that cold make that work out would surely have commercialized something like the work of MIT researcher Michael Strano who have devised tiny solar-electric generators that can break apart and reassemble. The team published their efforts in Nature Chemistry. The research solves a significant problem in the shift toward solar power, that of degradation. Even silicon solar panels lose efficiency over time as solar radiation breaks down its components. Yet plants don’t have this problem: they use sugar and minerals to constantly refresh their photosynthetic cells, e.g. leaves. Strano and his colleagues looked at how leaves work to develop their tiny solar generators. Using seven different chemicals the generators will self assemble, even after they’ve broken down, and with no loss of efficiency. The basic unit requires a synthetic phospholipids, which itself is just a plate to hold the chemicals that react to light. These chemicals release electrons when photons hit them. The phospholipid plates are themselves attracted to carbon nanotoubes. The tubes, which are highly conductive, are lined up in long rows forming a wire to carry the electrons to their destination. But even through the reaction is 40 percent efficient ---- more efficient than standard thin film photovoltaic cells, which capture about 28 percent of sunlight ------ that’s not even the impressive part. When the system is damaged, as sunlight is wont to do to solar panels, it will reassemble itself. Strano and his team broke down the system again and again over a 14-hour period and the system consistently put itself back together again with no loss of efficiency. Take that Cylon Model 6. The humans will have self-assembly without your help. (picture courtesy of PR Web)