I Come For Love: Getting Down With Aliens 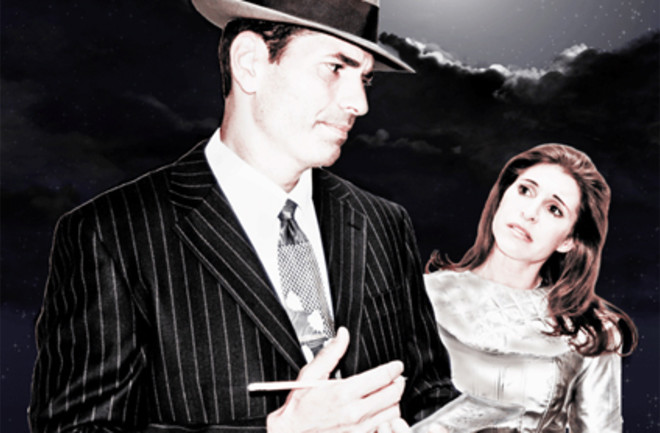 This year's New York Musical Theater festival included I Come For Love, a musical comedy inspired by classic science-fiction B-movies. Claiming to be the real story of what happened at Roswell in 1947, the tongue-in-cheek plot revolves around a female alien (dubbed "Nine-Oh") who has landed in her UFO in a bid to find out just what is this Earth thing called love. An enjoyable romp, I Come For Love juxtaposis the "dissection's too good for 'em" sensibility of the classic1950'sB-movies with the "save the innocent alien" ethos that came along in laterdecades. Nine-Oh and a hard-bitten reporter called (what else?) Scoop end up falling in love and must overcome diverse obstacles, viz, the U.S. Army and a mob of local townsfolk. Which leads me to two questions: a) why are shows like I Come For Love so rare, i.e., why is there so little science fiction on the stage? and b) could humans and aliens ever interbreed? The first question arises because if you look at theater's cousins, TV and film, science fiction is everywhere. It always amuses me when, every few years, somebody writes about how fantasy or science fiction is finally entering the mainstream. After all, 15 of the 20 biggest all-time international box-office movies have been either science fiction or fantasy. Why do people think all those 1950's B-movies got made? Because studio executives knew science fiction was immensely popular. Yet there's very little science-fiction on the stage. Perhaps it's because people expect a lasers-and-spaceships spectacle, but there's more to science fiction than space opera: tightly drawn character studies that don't require an army of CGI artists and a rendering farm are notexactlyunknown in science fiction. Ironically, when CGI artists are used in the service of science fiction, it often involves actors working against green screens, painting in their minds the scene their character is supposed to be reacting to: at the recent screening of Sanctuary in New York, Amanda Tapping said that acting in these conditions was very similar to acting in a stage play with a sparse set. As for my second question about human-alien interbreeding: not likely, but not absolutely beyond the bounds of the possible. Earth is home to millions of species, all directly related to each other through the tree of life. We all share the same cellular mechanisms, and the same genetic code that translates the base pairs in our DNA into proteins: a DNA sequence that creates protein X in animal A, will still create protein X if transplanted into animal B. But despite this similarity, pretty much what defines one group of organisms as a species is that members of the group can't interbreed with organisms outside that group. If dogs can't interbreed with their genetic cousins, cats, what hope for an alien and a human? Well, the door isn't completely closed. Scientist do routinely take genes from one animal and stick it another, creating a hybrid, transgenic, creation. This is how we end up with things like glow-in-the-dark mice: a jelly-fish gene that codes for a protein that fluoresces is introduced into a mouse's cells, a genetic combination that could never happen naturally. But that's working with a single gene—the mouse is still very much a mouse, not remotely like the picture of a bizarre creature with cheese-seeking tendrils that comes to mind when you wonder what you'd get if you crossed a mouse with a jellyfish. But is it possible to create a more hybridized creature, something that does share large scale traits from its parents, along the lines of mule inheriting aspects of horse and donkey biology? The answer is a big maybe for species that are closely related (one proposal for resurrecting the wooly mammoth would rely on hybridizing living elephant and preserved mammoth DNA). But the answer gets closer and closer to "no" the farther apart two species are on the tree of life. The only way a human and alien would have even the faintest ghost of a chance of interbreeding biologically would be if the panspermia theory is correct and many planets across the galaxy were seeded with DNA in the distant past (this is how aliens can interbreed on Star Trek, for example.) As for I Come For Love—well, I might be betraying a bias here, but I'm all for any show where the journalist gets the girl.