A new medical paper raises complex questions over ethics and human rights, as it reports on a study that took place in a religious camp where mentally ill patients were chained up for long periods. The paper's called Joining psychiatric care and faith healing in a prayer camp in Ghana and it's out now in the British Journal of Psychiatry. The authors are a Ghanian-British-American team led by Dr Angela Ofori-Atta. In Ghana, the authors explain, there are just 25 psychiatrists to cater to a population of 25 million. So the mentally ill are often taken to evangelical Christian prayer camps, which draw on the widespread belief that mental health is a spiritual issue. The prayer camps "have come under scrutiny for human rights violations", Ofori-Atta et al. say. The practice of chaining up patients, sometimes for long periods, is one of the main controversies. 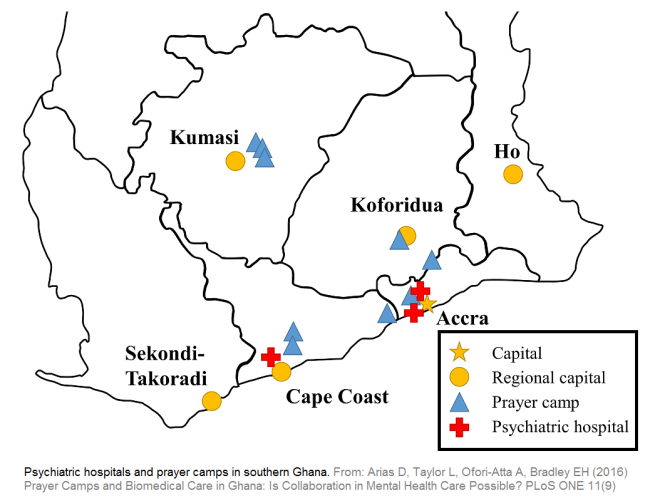 Ofori-Atta et al. went to one such camp to test the effectiveness of orthodox psychiatric care and, hopefully, reduce the use of chaining. The camp, Mount Horeb, promises to "set free those held captive by Satan", but it features its own kind of captivity. Patients who, in the opinion of camp staff, are a risk to themselves or others are chained down by the foot in a building called 'the sanitarium', for as long as the staff feel is necessary. Camp and sanitarium admissions were voluntary, but may have been subject to family pressures. Over a two year period, the authors carried out health assessments on sanitarium residents and made psychiatric diagnoses. It was a randomized trial: half of the patients were selected to be offered antipsychotics or other psychiatric medications as prescribed by the doctors. The other half, a control group, were not offered medication, unless there was an "urgent need". The patients treated with medication showed a greater improvement in symptoms compared to the control group, with a moderate effect size (d=0.48). However, despite symptom improvement, the treated patients were not freed from their chains any earlier. Patients were chained, on average, about 6 days each week, over the 6 week assessment. Ofori-Atta et al. conclude that

This study is the first to rigorously demonstrate the clinical effectiveness of combining psychiatric care with traditional healing and/or religious practice in a prayer camp environment... Although, in this case, the observed clinical benefits did not lead to a reduction of days with time spent in chains, structural modification of the collaboration may allow the symptom improvements observed here to translate into reduced use, or elimination, of chaining.

So that's the study. Was it ethical? The researchers got approval from the ethics board of the Noguchi Memorial Institute for Medical Research, University of Ghana. But ethics boards - in any country - don't always get things right. To unpack the ethical issues here, let's start by looking at what Ofori-Atta et al. say. They discuss the ethics of their study at some length, acknowledging that"this study posed an ethical challenge because of potentially abusive treatments included in standard prayer camp procedures." The authors are careful to point out that the study staff never recommended chaining, nor facilitated it: "There was neither endorsement nor legitimation of any abusive procedures." The message is: it was a dirty environment, but our hands were clean. However, some people might say that collaborating with the camp staff in order to conduct the study was itself tantamount to condoning the abuse. Some would say that rather than study the chained patients, the authors should have freed them - or at least demanded that they be freed, and had no co-operation with the abusers. Indeed, in a commentary on the Ofori-Atta et al. paper

, Vikram Patel and Kamaldeep Bhui decry chaining as "an affront to humanity" and call on psychiatrists to "stand up to this outrage" around the world. Patel and Bhui don't explicitly call Ofori-Atta et al.'s trial unethical for studying chained patients, but they say that chaining should be directly opposed through human rights activism - which sounds like an implicit rebuke to Ofori-Atta et al.'s 'collaborative' approach. Again, in another commentary

, Julian C Hughes points out that "working alongside torturers... to change the torturers' habits by allowing them to witness how effective non-torture might be, would be completely unethical". He goes on to discuss reasons why chaining might not be a form of torture, but the point remains: if we cooperate with wrongdoing, we are complicit in it, even if our intention is to help end the wrongdoing eventually. Then again, from a pragmatic, utilitarian perspective, we should take whatever steps are necessary to bring about the best outcome. If the only way to end an injustice is to join with the unjust and bring about change 'from the inside', then we should do it, on this view. Equally, we shouldn't judge the ethics of the study based on the fact that it found a null result (I think Patel and Bhui may be guilty of this.) Unfortunately, Ofori-Atta et al. found that medication did not reduce chaining, but if they had, they would have shown a clear way forward that could end the practice. Overall, this paper is real ethical minefield. Perhaps we need to pray for moral guidance.