How to Bring Armageddon the Right Way

Science fiction without science is merely fiction. There are gray levels in how well the science is portrayed in television and cinema, however. For the third straight year, Discover Magazine and the National Academy's Science and Enterainment Exchange hosted a science-of-science-fiction panel at San Diego Comic-Con, and this year's theme was "Abusing Science in Science Fiction." Each panelist provided two video clips from sci-fi television or cinema: one of science done right, and one where the science, well, wasn't done right. I've always maintained that in science fiction TV and cinema good science should be jettisoned in deference to drama as a last resort only--and then when you have all your other ducks in a row. If the science is solid in the large bulk of your work, we'll make the leap with you when you get a bit more... speculative. Some works stick to grounded science well, some do not. Therefore, for my clips, I chose two instances of the same type of event--the impact of a comet/asteroid with Earth -- one done well (Deep Impact), one that could have been done better (Armageddon). Since Deep Impact's science is fairly solid, and their science advisor (they actually had one!) 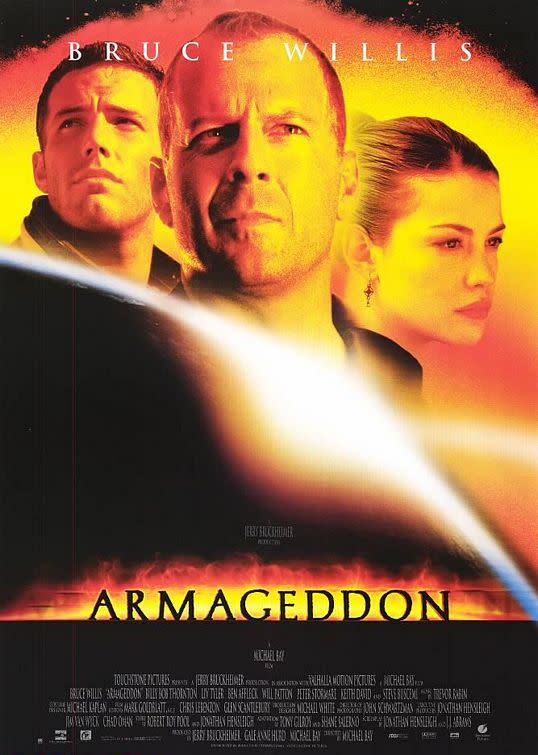 once told me "We pretty much get our mistakes out of the way in the first five minutes", there's little to say. There's plenty to say with the Armageddon clip I chose -- which was the first 40 seconds of the movie. The opening of Armageddon purports to show what is called the K/T Event -- the asteroid or comet impact 65 million years ago that caused most of life on Earth, including the dinosaurs, to meet extinction. The opening narration, done by Charlton Heston doing his best Moses voice, starts out:

Here's where getting the science right would have improved the drama. To be more correct, Charlton Heston wouild have said:

It hit with the force of over 19 million 1 megaton nuclear weapons.

It hit with a force almost 1.5 billion times the atomic bomb dropped on Hiroshima.

While Charlton narrates, the video shows the impact, and a blast wave traveling over the entire planet. While normally willing to suspend disbelief happily, from a science standpoint this movie lost me in the first 30 seconds when I first saw it in the theatre. The blast would not have traveled that far. What the video could have shown, and Charlton could have described in his best "The Dinosaurs Have Been Smote" voice was the several-hundred-foot-high tsunami that raced away from the impact. Or the chunks of impactor and target rock that fell back to Earth as secondary impacts, setting most of the world's forests on fire. What Charlton says instead is:

A trillion tons of dirt and rock hurtled into the atmosphere.

That's about 1/10 the mass of the impactor (assuming it was an asteroid), so that number isn't too bad, but, where's the drama? What is the result of this? He continues with:

...creating a suffocating blanket of dust the sun was powerless to penetrate for a thousand years.

Probably not that long, the dust probably settled out faster than that -- without the sun's life-giving radiation, it would not have taken long for Earth's ecosystem to collapse.

It happened before. It will happen again.

Yay! They got something right! It's clear that had the folks who made Armageddon stuck to known science, they could have made this scene simultaneously more realistic and more dramatic. If you missed the panel, weren't able to attend Comic-Con, or were turned away at the door because the room was packed, here's the video: The "Science of Science Fiction" panel will be back at San Diego Comic-Con again next year -- hopefully in a much larger space (and hopefully it will still be in San Diego).