How to Be A More Human Human 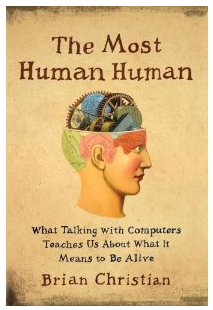 Brian Christian is an exemplar of the human species. In 2009, Christian participated in the annual Loebner Prize competition, which is based on Alan Turing's eponymous test for determining if a computer is able to "think" like a human. Christian did not submit an A.I. he had programmed, but his own mind. Christian was a "confederate," that is, one of the humans representing humanity in the competition. Five A.I. programs and five humans compete to be judged the most human:

During the competition, each of four judges will type a conversation with one of us for five minutes, then the other, and then will have 10 minutes to reflect and decide which one is the human. Judges will also rank all the contestants—this is used in part as a tiebreaking measure. The computer program receiving the most votes and highest ranking from the judges (regardless of whether it passes the Turing Test by fooling 30 percent of them) is awarded the title of the Most Human Computer.

What makes the competition so intriguing is that, as all contestants are ranked, be they human or computer, there is not only an award for the Most Human Computer, but also an award for the Most Human Human. Brian Christian is one of the vetted few humans who has earned the accolade. He describes his experience in the competition in his outstanding article "Mind vs. Machine" in The Atlantic. The articlepresents a snippet of what will surely be a wonderful book, The Most Human Human. Like Sherry Turkle, Christian argues that machines are calling our humanity into stark relief. Yet he sees human-like computers not as automatons dragging us into banality, but as imperfect mirrors, reminding us of what makes us human by what they cannot reflect. I suspect it's Christian's double-life as a science journalist and poet that drew him to consider our dual-natured human brain:

Perhaps the fetishization of analytical thinking, and the concomitant denigration of the creatural—that is, animal—and bodily aspects of life are two things we’d do well to leave behind. Perhaps at last, in the beginnings of an age of AI, we are starting to center ourselves again, after generations of living slightly to one side—the logical, left-hemisphere side. Add to this that humans’ contempt for “soulless” animals, our unwillingness to think of ourselves as descended from our fellow “beasts,” is now challenged on all fronts: growing secularism and empiricism, growing appreciation for the cognitive and behavioral abilities of organisms other than ourselves, and, not coincidentally, the entrance onto the scene of an entity with considerably less soul than we sense in a common chimpanzee or bonobo—in this way AI may even turn out to be a boon for animal rights.

Among many conclusions Christian draws is that to be more human you must be yourself. But this is no idle command. The process of being oneself is an active, conscious, and, in some cases, laborious task. Consider your average conversation at a cocktail party – safe topics, non-confrontational questions, scripted answers. Part of Christian's message, it seems, is not that we should worry about a computer sounding human, but that we humans may make the task too easy. So go forth and be quirky, odd, unique, expressive, honest, clever, eccentric, and above all yourself; in a phrase, be more human.

Image of The Most Human Human via RandomHouse