How the Brains of Bookworms Compare To Those of Bibliophobes 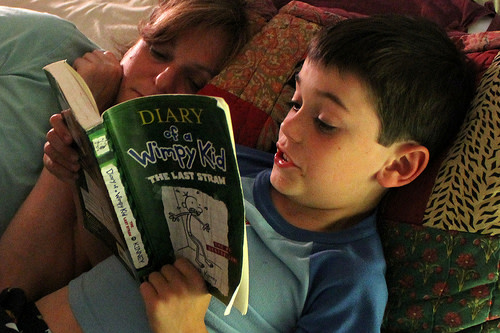 We all knew the kid who couldn't be pried away from her book---and the kid for whom each page was an exquisite torture. Why do people take to reading with such varying amounts of ease? A new study

that looked at the differences in the brain development between children with different reading abilities may help answer the question. The researchers monitored subjects over a three-year period and found some interesting correlations between reading ability and neuronal wiring. Reading depends on connections among several areas of the brain that process visual, auditory, and linguistic information. In particular, two bundles of nerves that connect key language areas in the brain have been shown to be associated with reading skills: the arcuate fasciculus

, important for understanding the sound structure of words, and the inferior longitudinal fasciculus

(ILF), which is important for seeing words. Researchers already knew that in better readers, these neuron bundles were fatter and better insulated. They wanted to know if the neurons of weaker readers simply started off with skinnier nerve bundles or if their neurons developed differently. To find out, researchers looked at how the brains of strong and weak readers ages 7 to 12 developed over a three-year period. In particular, the researchers looked at the changes in levels of white matter in the brain. White matter represents the long nerve fibers covered in fatty white material called myelin, that connect different cortical areas of the brain. The myelin insulates the nerves, like the plastic around the cord of an appliance, and the more myelin wraps around the nerves, the better insulated they are and the faster their signals can travel. The researchers also monitored the children’s progress in reading throughout the study. The children's relative reading abilities did not change much; the ones who started off weak readers stayed weak compared with the reading whizzes. But the children in the two groups exhibited differences in the arcuate fasciculus and the ILF: In strong readers, these nerve connections started weak, then strengthened; the neuron bundles got more myelinated. In weak readers, they started strong, then were pruned away---the nerves died back. The researchers think that in the strong readers, myelination and pruning happen at the same time and in response to the same stimuli as children are learning to read. But in poor readers, they think, these processes are happening out of sync. The researchers hope that eventually, better understanding of how the brain develops as children learn to read might allow teachers to tailor reading lessons to the developing brains of their students.