How Not To Do Great Science

This post is a bit special. For the first time ever, I've collaborated with an artist, Erene Stergiopoulos. Her webcomic is here and she's on Twitter here. I think you'll agree that the artistic standard is a little higher than I usuallyachieve. Anyway, here's what we did. 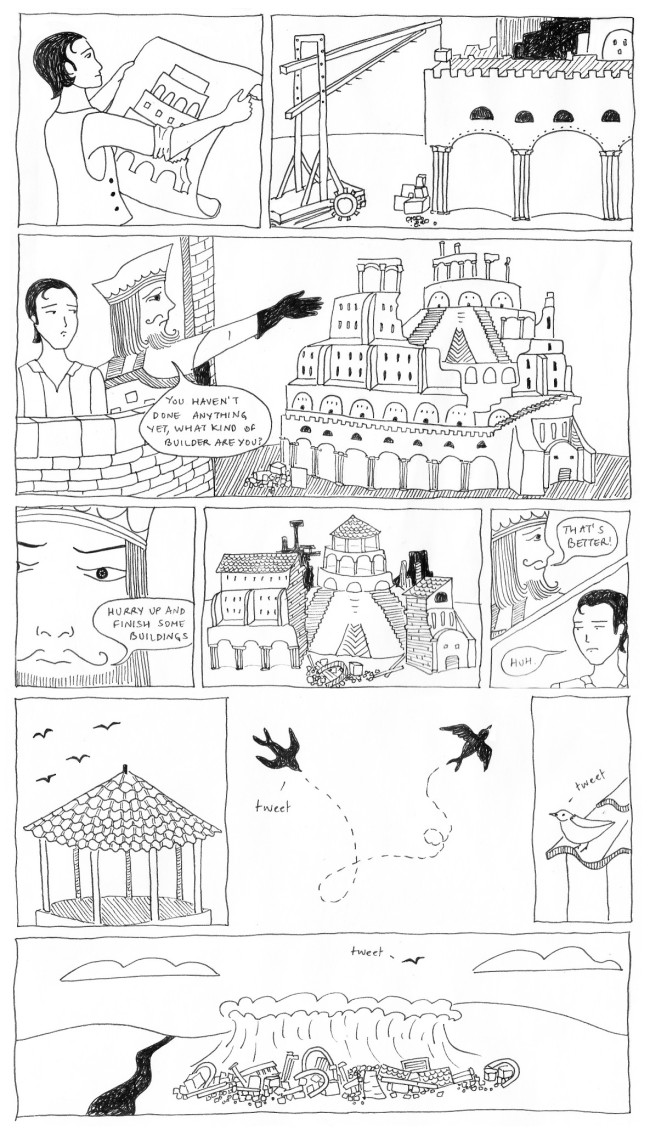 It would be silly to expect that every architect should finish buildings at a certain rate. That would make it impossible to anyone to build certain things. Some things take longer to build than others, and most great things take a great deal of time. Faced with a sufficiently demanding quota, builders might be reduced to rushing out follies

that might look impressive from a distance, but that are no more than hollow shells. Yet, as silly it would be to make uniform demands of architects, this is what is happening to scientists. Rather than build, scientists are expected to publish - and publish fast - or perish. My worry (and that of many

) is that the pressure to publish often fundamentally changes not just how much scientists write, but what they can write about. It turns researchers into prolific doers of small deeds, but it leaves them little time to think about, let alone complete, great works. Though the mills of God grind slowly...

Yet the problem is not just the speed

of science today, but also the direction: go to a scientific conference and you'll see perfectly good data in the process of being oversold, misinterpreted, and p-hacked

into a 'publishable' form. Much has been said

about how this leads to false positives - impressive follies that don't stand up to scrutiny. What's less discussed - and the point of this piece - is the opportunity cost

. New theories come out of attempts to explain 'negative' data - negative from the perspective of the old theory. Null results are the foundations of future progress, but only if they are allowed to lie there awhile; not if they are torn up and used to prop up tottering old structures.