How Flexible Is Brain Organization?

Functional reorganization of cortical activity can occur within minutes of neural disruption to maintain cognitive abilities.

The authors, San Francisco's Zanto et al, temporarily disrupted a certain brain region, the right inferior frontal junction (IFJ), using magnetic stimulation (TMS). As the IFJ is involved in top-down selective attention, the authors say, you might expect knocking it out to impair performance on a selective attention task - but no:

Although TMS disrupted neural activity in task-related brain regions, performance was not affected. Critically, another brain region not previously engaged by the task was recruited to uphold memory performance.

If true, this is a bombshell. It would mean that the brain is able to dynamically repurpose brain areas to perform new tasks. That would undermine the idea that brain regions even have particular functions, and maybe even call into question the entire localization paradigm that has dominated neuroscience for decades. But how solid are these findings? First some background. Zanto et al's selective attention task involved showing participants images consisting of a face overlaid on a landscape. The instructions were to focus on either the face or the landscape, and remember it, while ignoring the other 'half' of the image.

It's known that brain activity varies according to which aspect of the image you're attending to, and they confirmed this using fMRI. A focus on faces increased activity in the Fusiform Face Area (FFA), while attending to the scene activated the Parahippocampal Place Area (PPA). Now for the fun bits. Zanto et al looked for areas of the brain which lit up at the same time as the selective-attention-based increases in the FFA and PPA. They found that the right IFJ was coupled with the right PPA - but not with the FFA. This is a notable null result, because in 2011, two of the authors of this paper reported that IFJ activity was linked to both the PPA and the FFA, in the same face-vs-landscape memory task. What's more, in 2011, the IFJ was associated bilaterally, not just on the right. Nonetheless, Zanto et al pinpointed the hot-spot in the right IFJ most linked to the PPA, for each individual person, and applied TMS over that tailor-made target during a second scanning session. 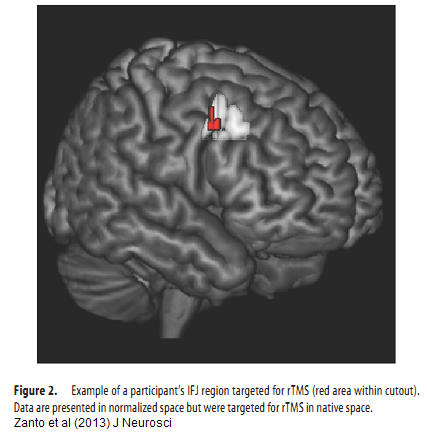 Not much happened - at first glance. IFJ TMS did not affect selective attention memory performance. This is another null result, because in 2011, Zanto et al reported that TMS of the IFJ did impair performance on a similar (though not identical) selective-attention-working-memory task. So, superficially, the present data suggest that the IFJ is not very important in selective attention. Causally, interfering with it does not affect performance, and even the fMRI activations were only seen in one of the two conditions. Enter the clever bit, "reorganization". The authors looked for areas that were more active when performing the task after TMS. There were several, but the headline result is that activity in one area, the left Lateral Occipital Cortex (LOC), was correlated with task reaction time (not accuracy): more LOC, more speed. 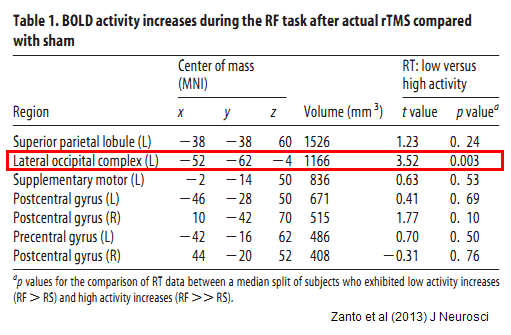 So, the argument goes, the left LOC must have taken over from the disrupted right IFJ - a functional reorganization, and a dramatic one, since the LOC is not traditionally regarded as being involved in top-down attention. Yet remember that we still don't know if the LOC is causally implicated in the task, or only correlated with it, after reorganization. How could we test that, to falsify the new hypothesis? Classically, to test involvement, you'd, well, use TMS to disrupt your area and see if that hurts task performance. However, I am not sure that this approach would work in this case, because in this study, the lack of effect of TMS was interpreted as showing, not that the region in question wasn't involved, but that it was - and another region was as well. So, while functional reorganization is an important idea, I am not sure that this study is enough to shift my paradigm yet.