Worries over the possibility that gay people are seeking to promote or spread their orientation are common. Sometimes these fears are expressed openly, and take the form of conspiracy theories. Then again, they can be unspoken reservations. 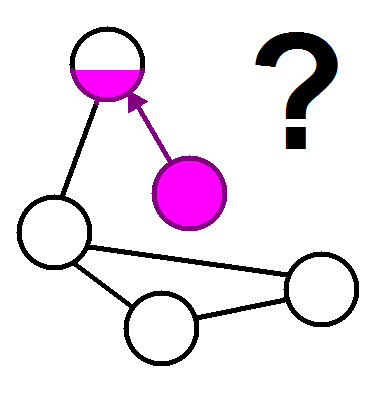 But what's the truth? A new study reassures us that

Same-Sex Sexual Attraction Does Not Spread in Adolescent Social Networks.

The data come from the Add Health study, a project that included around 15,000 adolescents from across the USA. Neuroskeptic readers may remember Add Health from the "black women less beautiful" controversy two years ago. The adolescents studied were 15-16 years old at baseline (1995) and aged 16-17 in the second phase (1996). As well as answering questions about their sexual desires and behaviours, they gave a list of their closest friends - who were often also participants in the study. In order to estimate possible social influences on sexuality, self-reported same-sex attraction in the second phase was analyzed in terms of various predictors from phase one, including the participant's own previous characteristics, and, crucially, those of their friends. The key finding was that having friends who reported same-sex attraction wasn't a predictor of later having such an attraction yourself. Friends did seem to exert an effect on desire for a sexual relationship, and on actually having sex - your friends' scores on those were associated with your own later scores - but there was no effect for sexual orientation. Gay siblings didn't have any influence either. As can be seen in this graph: 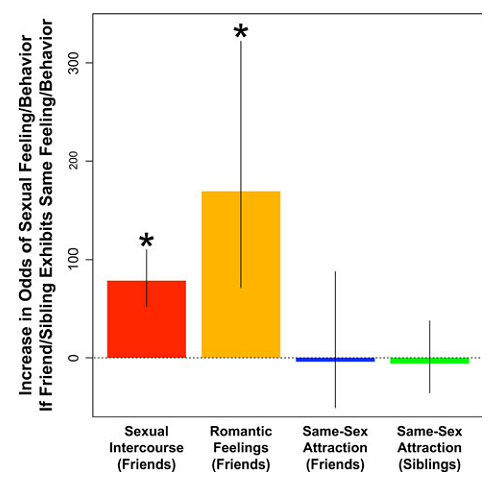 Although this measure of same-sex sexual attraction was purely self-report and fairly crude, it correlated strongly with whether participants went on to identify as gay, lesbian or straight a number of years later. Nor did people who experienced same-sex attraction tend to have friends who did - there was no 'clustering' by that variable, although clustering was seen for other things such as having intercourse:

So, there we have it. Homosexuality is not contagious. Not in 1990s high schools, anyway. However, the odds seem low that the conspiracists will believe this. What will their objections be? Perhaps they'll focus on the Add Health study... (tinfoil hat on) which in fact grew out of a 1991 teen sexuality research project that was rightly quashed by conservatives, because it acknowledged the existence of teen sexuality. But the study re-emerged in 1994 - under Bill Clinton. It was funded by many federal government agencies and the Robert Wood Johnson Foundation, an elitist 'public health' organisation who are also notorious for supporting restrictions on those harmless pleasures, tobacco and alcohol. So it's quite clear that Add Health represents a neo-Puritanical attempt to promote sexual permissiveness (tinfoil hat off).