Heritable and heritable: the gifted and the lucky 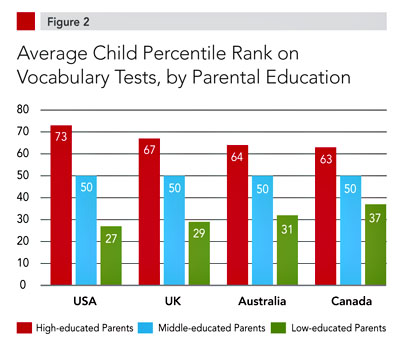 A few days ago Kevin Drum put up a post with the title "Being Poor in America Really Sucks". He linked to a Pew survey which reported that the United states seems to have a stronger correlation between parent-child socioeconomic outcomes than most other nations. The implication here is that social mobility in the United States is lower than in other nations, in contradiction to our national mythology. This seems generally correct, in that I've seen this result reported repeatedly for the past decade (I'm sure you could slice and dice the finding to show it wasn't quite right, but to a first order approximation you'd still have to start with that result before deconstructing it). But the finding itself is not what caught my attention. Drum goes on to say:

But in the United States they do a lot worse. The Pew chart is normalized so that children of middle-educated parents score in the 50th percentile and other children are compared to that standard. In Canada, the least-advantaged kids manage to score at the 37th percentile. In the United States they score at only the 27th percentile. Now, it's pretty unlikely that Canadian kids with low-educated parents are genetically unluckier than American kids with low-educated parents. Genes may account for some of the overall difference between rich and poor kids, but not for the difference between Canada and the U.S. That has a lot more to do with how we raise our kids and what kind of attention we give them at early ages. On that score, the United States does wretchedly. We simply don't give our poorest kids a fair start in life.

What I want to explore is the general issue of the correlation between the trait of a parent and the trait of a child. This correlation can be driven by a variety of factors. It could be heritable in the technical sense, in that the correlation across the population of the trait between parent and offspring is due to variation in genes. Or, it could be heritable in the colloquial sense, where parents provide their offspring cultural and social capital. Heritability in the latter sense is probably what Drum and most people think of when they see a tight correlation between parents and offspring. Nevertheless, we need to consider the other option. Education and academic test scores are different traits, but they are roughly reflective of the same underlying characteristic, academic aptitude. If you consider them the same trait then you can think of the chart above as a parent-child comparison. In a classic quantitative genetic model the correlation is going to be low when "environmental noise" dominates the system, and the correlation will go up as environmental noise disappears. In other words, the correlation will increase in a perfect meritocracy, and social mobility will decrease!

I don't necessarily think that this explains the situation above. In fact, I am moderately skeptical that it's a good explanation for the pattern above, and am willing to concede the plausibility of Drum's thesis. My only issue is that we shouldn't neglect the possibility that at some point in the near future we might actually attain a state where social mobility starts to decrease simply because of the genetic sorting of classes by merit. In the case of something like income and academics the role of chance is high enough that this might not seem feasible. But consider the possibility of socialized medicine, and advances in technology. In the near future we may start to see in the societies with the highest median level of medical care that life spans of parents and offspring exhibit the tightest correlations. Why? Because these are the societies were environmental variables have been removed to the greatest extent. At this point the media might begin to report about the "life expectancy gap" between the long-lived lineages and the short-lived ones, but at least in this case biomedical science could marshal persuasive evidence that the difference is due to differences in genes.