If you picture a woman twisting a doorknob, all the elements of this brief event show up in your mind - the woman, the twisting action of her hand and the doorknob. But as I describe this scene and as you read it, the players are mentioned in a very strict order. The subject (the woman) comes first followed by the verb (twisting), and the object (the doorknob) holds up the rear.

These word orders are one of the most fundamental aspects of any language and one of the earliest that young children pick up on. The Subject-Verb-Object order of English (SVO) is typical of many languages including French and Spanish. Other tongues like Japanese, Korean and Turkish use a different SOV order, where the object precedes the verb ( "woman doorknob twist"). Chinese uses both forms depending on the verb, and some scholars believed that it is returning to its roots as an SOV language, after a stint as an SVO one.

Now, a group of psychologists have discovered that the way that words are ordered in our languages has little effect on their sequence in our minds. Susan Goldin-Meadow from the University of Chicago found that people who are asked to describe events with only hand-gestures, they used the SOV order of Japanese and Turkish, regardless of the conventions of their mother tongue.

Together with Dutch, Turkish and Singaporean colleagues, Goldin-Meadow tested 40 adults, including equal numbers of English, Turkish, Spanish and Mandarin speakers. They watched short vignettes of everyday actions and were asked to describe them - aloud at first, and then using only their hands. All the vignettes portrayed mundane activities, of the sort that children talk about when they start to learn languages, such as "girl gives flower to man" or "duck moves to wheelbarrow".

Goldin-Meadow asked another group of linguistically diverse volunteers to describe the same vignettes using a set of transparent pictures that depicted line drawings of the various objects (girls, wheelbarrows etc.) and the actions (waving, moving etc.). They had to reconstruct the event by stacking the transparencies onto a peg, a task that, unlike the gesture assignment, has no communicative purpose.

As expected, the English and Spanish speakers used the subject-verb-object word orders that are typical of their native languages, while the Turkish speakers placed the objects in front of the verbs, as is customary in theirs. The Chinese speakers used the SVO form for actions that happened in the same place, but the SOV form for those that involved some sort of physical movement.

However, when their lips were sealed and their hands spoke for them, all of them used the same SOV word order ("you mouse click"). Even the English and Spanish speakers, who are so accustomed to SVO rules, inverted their verbs and their objects when they used their hands. And the same thing happened when they stacked transparencies. 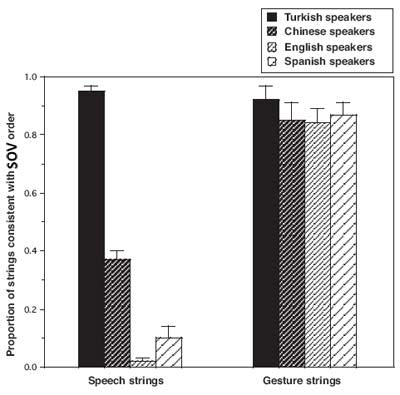 So what is it about the SOV order that makes it so universal outside the spoken tongue? It's certainly not an intrinsic property of hand communication, for American Sign Language uses the same SVO word order that English does. Nor is it even specific to communication, as the transparency task showed. Instead, Goldin-Meadow suggests that SOV represents a natural and fundamental sequence for representing events used by our brains.

She admits that you might expect the verb, which frames the event, to take pole position. Certainly in the gesture task, the verb gesture (be it raising a hand to a mouth or shutting an invisible lid) provides the context that allows you to distinguish between gestures for similar items, like a glass or a box.

Instead, the verb is relegated to the end, and Goldin-Meadow thinks that this is because objects are more easily represented in the brain than actions. They exist in their own right, while actions depend to some extent on the relationships they create between different objects. The upshot is that it might be less mentally challenging for people to first highlight the objects involved in an event, before describing the actions that link them. That's a bit speculative, but there is plenty of other evidence that the SOV order is indeed the fundamental one.

For a start, if a new language emerges without any external influences, it uses an SOV order. Over the last 70 years, the deaf members of Israel's al-Sayyid Bedouin tribe have spontaneously developed their own sign language. In the space of a single generation, the newly born tongue assumed a strict grammatical structure, and one that adhered to SOV.

In fact, deaf children all over the world tend to invent their own communicative gestures if their parents don't teach them sign language themselves. And in every case, from America to China, the object paves the way for the verb. As languages become more complex and more popular, they may lose their original SOV order as various pressures compete to shape its structure, including the need for clarity, efficiency or even interest. And as cultures speaking different languages interact, one word order may overwhelm another for reasons completely unrelated to the languages themselves.

Goldin-Meadow's fascinating work challenges the idea that the language we speak affects they way we think and see the world, even when our lips are sealed. This idea - the Sapir-Whorf hypothesis - has been supported by some studies and decried by others, but this new research suggests that at the very least, order that words are represented in the brain remains resolute in the face of linguistic influences. If anything, the influence goes the other way, with the fundamental word order shaping the properties of emerging languages.