Genes can be criminogenic

As a follow-up to my post below, I just wanted to check some recent literature on crime and heritability. I found this, Heritability, Assortative Mating and Gender Differences in Violent Crime: Results from a Total Population Sample Using Twin, Adoption, and Sibling Models:

Research addressing genetic and environmental determinants to antisocial behaviour suggests substantial variability across studies. Likewise, evidence for etiologic gender differences is mixed, and estimates might be biased due to assortative mating. We used longitudinal Swedish total population registers to estimate the heritability of objectively measured violent offending (convictions) in classic twin (N = 36,877 pairs), adoptee-parent (N = 5,068 pairs), adoptee-sibling (N = 10,610 pairs), and sibling designs (N = 1,521,066 pairs). Type and degree of assortative mating were calculated from comparisons between spouses of siblings and half-siblings, and across consecutive spouses. Heritability estimates for the liability of violent offending agreed with previously reported heritability for self-reported antisocial behaviour. While the sibling model yielded estimates similar to the twin model (A ≈ 55%, C ≈ 13%), adoptee-models appeared to underestimate familial effects (A ≈ 20–30%, C ≈ 0%). Assortative mating was moderate to strong (r spouse = 0.4), appeared to result from both phenotypic assortment and social homogamy, but had only minor effect on variance components. Finally, we found significant gender differences in the etiology of violent crime

A = additive genetic variance component C = shared family environment This table from the paper shows the influence of study design.... 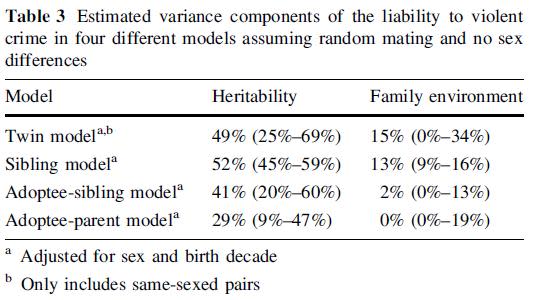 All of these statistics are summaries or representations of patterns in the real world. They are not concrete entities in and of themselves. So, for example, the authors admit that their power to detect patterns among females was low. Why? There were simply too few female violent criminals! Second, they speculate that their lower values for adopted-parent comparison had to do with a similar problem: this Swedish sample tended to have adopted parents who were extremely lacking in criminality, while their childs' biological parents tended toward violent crime. As outlined in the post below by commenters the biggest issue here is that direct parental suasion and modeling matters a lot less than the broader milieu which the parents raise their offspring in. In a broad stylize fashion Dan Quayle may have been right, but Hillary Clinton was right too: it takes a village.