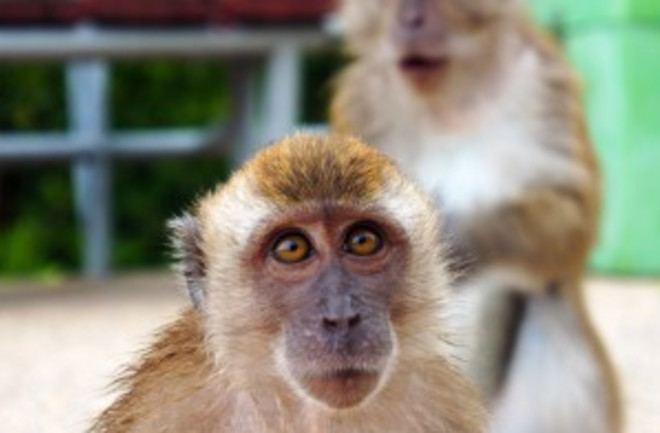 Two rhesus macaques, though not the two shown here, have helped scientists identify a brain region important for risky decision-making. (Credit: izarizhar/shutterstock) Researchers have identified a key brain area associated with high-risk behavior, thanks to two monkeys they trained to gamble. Before the rhesus monkeys could start gambling, they had to learn the researchers’ system of cues. Squares of different colors signaled how big the payout – a drink of water or juice – would be. “They know which (color) gives which amount,” says Veit Stuphorn, associate professor of psychological and brain sciences at Johns Hopkins University. “In the wild, they’re doing this all the time, using very small differences in visual cues. So we’re tapping into something that has ecological meaning for them. This berry is slightly better, or this root.” But, Stuphorn says, “probability is harder to teach.” Xiaomo Chen led the study and is now a postdoctoral fellow at Stanford University. To teach the monkeys to understand their odds, she and Stuphorn next showed the animals squares with two colors at a time. More area of a color meant higher odds of that outcome. The monkeys got that, too. As a control, the scientists ran trials where two options had the same probabilities but different maximum payouts, plus trials that had different probabilities for the same maximum payout. The monkeys almost always chose the better option, showing that they knew what they were doing. To add an extra layer of precision, Chen and Stuphorn trained the monkeys to play this game totally visually: they didn’t press any buttons, or use any signals other than holding their gaze on the square they wanted to choose.

The monkeys, as it turned out, were highly risk-seeking, regularly choosing options with higher potential rewards at low odds. Part of this, says Stuphorn, is likely that each trial had a relatively small amount of reward at stake, and that they knew there would be thousands of trials. “They might have been more risk-averse if there was a risk of pain or real danger, but obviously we can’t test that,” explains Stuphorn. Regardless, the monkeys liked the gambles, and this allowed Chen and Stuphorn to study the brain mechanisms behind the risky behavior.

Researchers have known for a while that the frontal cortex of the brain is important for decision-making. But Chen and Stuphorn wanted to know if a particular area, the Supplementary Eye Field or SEF, was associated with risky decisions. The most straightforward way to test what a brain region controls is to turn it off. This can be done, temporarily, by cooling down the neurons until they’re too cold to fire off their action potentials. Conveniently, the SEF is only about 1 mm deep, so the researchers could cool it off – and turn it off – with external cold. When they did, the monkeys’ behavior changed: they became more risk-averse. But there were other behaviors associated with gambling that were not affected; notably, that monkeys were still more likely to gamble after a win, and more likely to play it safe after a loss – a common behavior among gambling monkeys and humans. “The specificity of the effect was exciting,” says Stuphorn. “To some extent it means you can decompose the mechanisms that overall compose the gamble.” These findings could lead to better treatments for humans with destructively risky behaviors.