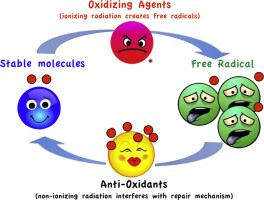 Here at Neuroskeptic I have written about research on the psychology of emoji's, but this is the first time I've seen an emoji-based scientific illustration. Wow. The paper itself goes on to explain that non-ionizing radiation is able to cause cancer and other problems by interfering with antioxidant (the yellow "kisser" depicted above) production in cells:

The trouble is, Havas doesn't say anything about how the disruption of anti-oxidants happens, and it's not clear how it could. Non-ionizing radiation such as radiowaves and microwaves consists of photons, just like visible light, but at a lower frequency. Because the energy of a photon is proportional to its frequency, very high frequency photons (like gamma rays) have enough energy to disrupt atoms producing those dangerous, zombie-like, green free radicals. But visible light can't do this, and still less can microwaves or radiowaves. There's no known mechanism by which such low-energy photons could harm living tissue - except that they can heat tissue up in high doses, but the amount of heating produced by radio and wireless devices is tiny. Havas concludes that

The rapid deployment of wireless technology needs to be reconsidered. The potentially harmful effects of Wi-Fi in schools; smart meters on homes; the 5G network, as well as previous generations of cellular telecommunication have not been adequately tested for biological compatibility.

I don't think we need to get into the debate over whether there is a statistical link between non-ionizing radiation sources and cancer. Some studies report an association, but if there is no physical mechanism that could explain it, my conclusion remains as follows: ¯\_(ツ)_/¯ (h/t Smut Clyde).