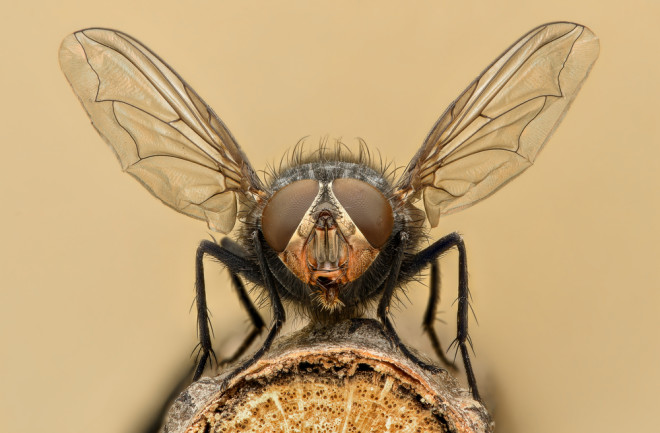 (Credit: Cornel Constantin/Shutterstock) The content you see on the internet is increasingly becoming tailored to you: Music based on your favorite jams, shopping suggestions corresponding to your recent purchases, and television shows similar to your most beloved episodes. These “similarity searches” drive custom content, and they’re pretty tricky to do correctly and quickly. I Know This Song That is, for computers at least. Fruit flies, on the other hand, seem to be pretty good at them. A new study in the journal Science takes a look at how fruit flies quickly and efficiently sort out and identify different smells. Their neural architecture is so well-designed in fact, that it could hold the key to more effective similarity searches. For brains, especially human brains, this kind of recognition isn’t too difficult, according to Saket Navlakha, assistant professor in Salk's Integrative Biology Laboratory and lead author of the new paper. Many animals perform similarity searches all the time. “For example, you might see someone and be like, ‘That guy reminds me of my uncle.’ Or you might hear a song and be like, ‘That band sounds like Nirvana.’ Or you might smell a perfume and be like, ‘That smell reminds me of an orange,’” Navlakha explains. He says in each of these instances we’re comparing new stimuli to an existing database of information stored in our brains. It would be much the same with animals in the wild — seeing a red berry may trigger a similarity search to other red berries to indicate that it might be poisonous. “It’s quite a general problem faced by many species,” says Navlakha. Fly On The Wall The problem of categorizing and understanding new information is a little trickier for computers — you’ve likely received an automated suggestion for a movie or product that seemed way off base. That’s because when most computers analyze data to categorize items, they pare down the information to work more efficiently. Computers assign a kind of digital shorthand, called a “hash,” to each item. From there, hashes are compared and matched with other, similar hashes, a process known as called locality-sensitive hashing. The simplified hashes make searching through thousands, if not millions, of other items faster and easier. Fruit flies, however, have a mechanism in their brains that performs similarity searches in a very different way. Specifically, they expand the stimuli information, as opposed to compressing and simplifying it. When fruit flies first sense an odor, 50 neurons fire in a combination unique to that smell. But instead of simplifying that information as computer programs would, the flies’ brains then send that information to a total of 2,000 neurons. With more neurons in play, the fly’s brain is able to give each smell a more unique label, meaning that it’s easier to categorize. The flies then pare this information down to the top five percent or so of neural signals, effectively sorting out only the most salient information. This creates a pattern similar to a digital hash that the fly can then use to identify scents and respond accordingly. When Navlakha and his team applied the flies’ process to three standard datasets used to test search algorithms, they found that the fly-inspired method improved the algorithms’ performance. He and his research collaborators believe the flies’ method of expanding data could improve the performance of digital similarity searches in the future. The research team also believes this study is among the first to find concrete parallels between brain function and digital information processing. And Navlakha is hopeful that other animal brains may help improve technology in the future. “Animal models play a critical role in this research, as many of the core algorithms used are believed to be shared across species. It’s still the early days though, and lots of excitement awaits,” he says.