From "Observations" to "Data": The Changing Language of Science

Today we hear a lot about scientific data - data sharing, data integrity, and Big Data, are all hot topics in science. Yet is science really about "data"? Did scientists in the past talk about it as much as we do? To find out, I ran some PubMed searches to find papers published in the last century, 1915 to 2015. I searched for "data" and for other alternative terms that can be used to refer to scientific findings. Here's a graph of the percentage of biomedical journal articles published each year, that have each certain word in the title. 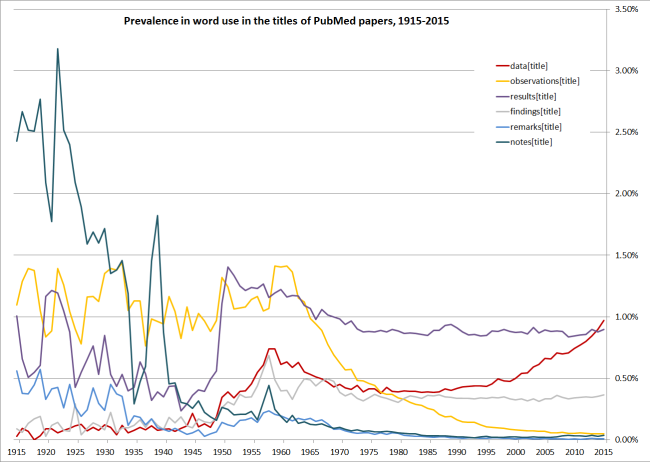 100 years ago, the term "data" was almost never seen in the titles of scientific articles. Instead, papers were commonly described as being "notes" or "observations". The term "results" was also used, but less than it is today. This first era lasted until the late 1940s. At this point, the word "results" became the most popular term. "Data" and "findings" also gained in popularity somewhat, while "notes" became almost extinct. "Data" became quite popular by the late 1950s, but its usage then peaked and declined. Finally, over the past few decades, we've seen the second rise of "data", which has been growing slowly but steadily since 1980, and has lately overtaken "results" as the most common word out of the ones I examined. "Observations" has been in decline since 1960 and is now very rare. What does this mean? My impression is that what we're seeing here is the gradual 'specialization' of science. In 1915, scientists seem to have preferred everyday terminology to describe their work. "Notes" and "Observations" are not specifically scientific terms. A historian, or a lawyer, or even a movie critic could use those words. In the second era, after WW2, the term "results" gained in popularity. This is still an everyday word, although it has some special connotations in science. Today, the rise of "data" seems to reflect a reversal in the relationship between science and the rest of the world. My impression is that "data" is being used more and more widely in normal discourse but this is a borrowing, so to speak, from science, whereas previously, science was borrowing from everyday life.