Fringe: Can They Hear What We Hear? 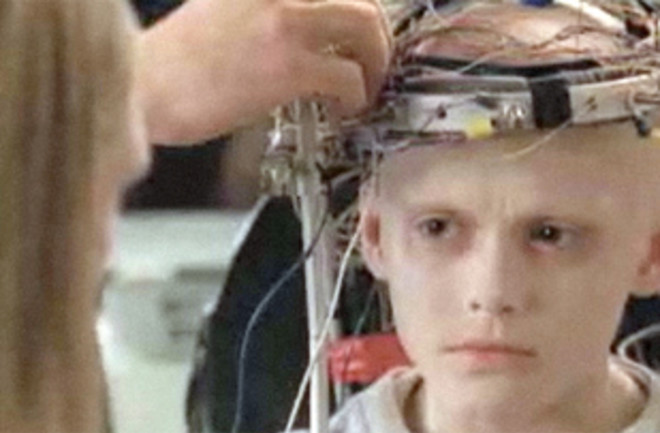 How often does the techno-babble utterly fail? Seriously, how often does a TV scientist explain a mysterious new phenomenon, McGyver together a device to tap it/diffuse it--and then totally strike out? I can't think of any, (eliminating of course, those inevitable mid-episode first attempts, where the cast has often overlooked some crucial piece of the puzzle that they figure out by the end), except perhaps for a failed attempt to stop an epidemic on an episode of Babylon 5 way back in 1995. But that's the kind of cliche-breaking madness we're coming to expect from Fringe. In last night's episode (warning, spoilers follow!), our heroes were faced with the inexplicable presence of a boy who had somehow survived for 70 years in a sealed underground vault. The boy was mute, though he seemed to understand English well enough, so our resident mad scientist Dr. Walter Bishop (literally mad. Non-fans may not know, but he was in a psychiatric hospital for years) donned his white lab coat and got to work. His neuro stimulator ("What can't it do?") was supposed to read the boy's brainwaves and convert them to speech, but aside from a voice-like noise, it simply didn't work. And then...the plot moved on. No more neurostimulator. On with the show! But I do wish someone had at least given poor Dr. Bishop a nice sip of cognac and a there-there pat. Science is nowhere near achieving what he was trying to achieve. Neuroscientists have been working with functional MRI scanners since at least early 1990s to sift out speech patterns from brain waves, but they've been stymied by all the other signal noise that go with speech. Silly little activities like breathing have been giving them fits. At the end of last year, Dutch scientists from Maastricht University had a breakthrough. Dr. Elia Formisano and her team discovered that the brain gives each phoneme of speech a unique code or fingerprint that shows up in the fMRI data. Then, whenever the brain hears the sound, no matter who or what is uttering it, the brain combines the different fingerprints into coherent speech. By reading the code, Formisano and her team discovered they could parse out different sounds, and even who is speaking them. Ultimately, they hope to be able to combine those sounds and tell what words are being heard. So, to sum up, we've got brain-scanning computers that can hear what we hear, see what we see, and possibly even move based on our thoughts. Hellooooooo SkyNet.