Forget the Firetruck: Future Firefighters May Use Ghostbusters-Like Electric Backpacks 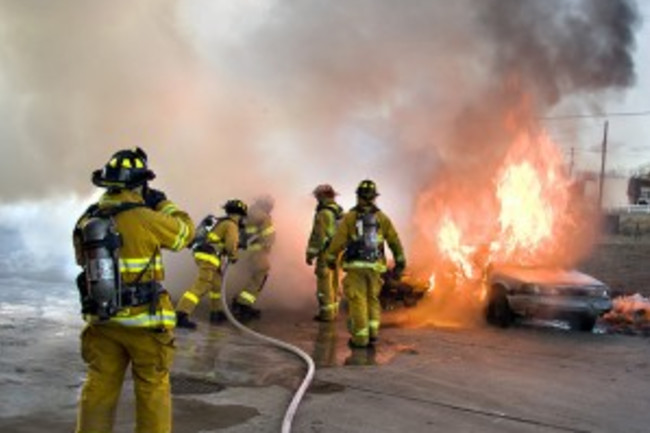 We learned watching Ghostbusters that for busting ghosts, nothing beats a well-placed zap of protons from a backpack-turned-positron collider. Now, researchers at Harvard University are working on a technique that could let future firefighters do their job (sort of) the same way, using an electric beam—generated by a portable amplifier, which might even fit in a backpack—to put out the flames. This futuristic method is based on a centuries-old observation that electric fields can do funnythings (videos) to flames, making them sputter and even snuffing them out. The researchers’ early-stage prototype consists of a 600-watt amplifier hooked up to a electric beam-shooting wand, according to their presentation at the American Chemical Society meeting earlier this week. In tests, they were able to quickly zap out flames over a foot high. A firefighting electric beam could probably be generated only using a tenth as much energy, estimated Ludovico Cademartiri, one of the researchers, meaning a much smaller amplifier would do the trick. They’re hoping to go after bigger fires, too, but the prototype has proven the concept. “Our research has shown that by applying large electric fields we can suppress flames very rapidly,” Cademartiri said. While fighting fire with electricity seems to work, it’s not quite clear how it works. Charged particles of soot appear to respond to the electric field, throwing the flame off balance. It’s likely a bunch of other things are all happening at once—but no one’s sure yet what those processes are. Whether it’s ye olde villagers passing buckets of water from the nearest well or modern-day firefighters with pressurized hoses and flame-quenching foams, putting out fires has has always been a matter of smothering them with some material. Zapping them with electricity instead could let firefighters do their work from farther away, and could be used to target a specific area—say, carving an escape route through the flames.

A New Eruption Might Be in the Works in Southern Iceland