For the first time, neuroscientists have directly observed a slow, steady fluctuation - a 'wave' - in the blood flow to the brain. The oscillation, which has a frequency of 0.1 Hz, or one cycle every 10 seconds, is mysterious, and could have big implications for neuroscience. The researchers, led by Aleksandr Rayshubskiy of Columbia university, used a fancy camera to record high-resolution movies of the surface of the brain of a patient who'd had her skull opened up during surgery for a brain tumour. By illuminating the brain with red, green, and blue lights, Rayshubskiy et al were able to measure oxygenated (HbO) and deoxygenated (HbR) blood along with total blood flow (HbT) - all thanks to the fact that oxygenated blood is redder. This revealed that in some bits of the brain surface, the amount of total blood, and oxygenated blood, changed with a consistent 0.1 Hz rhythm:

A second patient, with epilepsy, did not show the same activity, however. Further investigation showed the waves to be closely correlated with the expansion and contraction of certain small arteries. Therefore, the phenomenon seems to be myogenic (muscle-based) in origin, as it's smooth muscle that controls artery size. 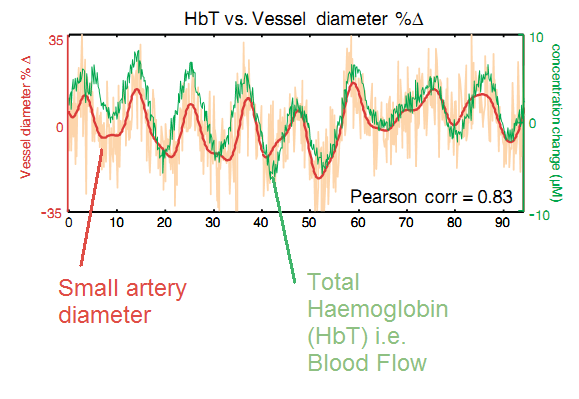 This isn't the first time that 10-second blood flow waves have been suggested to exist in the brain, but until now, they've never been observed directly - and their origin has been a mystery. We now know it's myogenic although what function it serves is anyone's guess. But why does it matter? As a neuroscientist, I'm most interested in what it could mean for fMRI scans. fMRI is a cornerstone of modern neuroscience and it's based on measuring the amount of deoxygenated haemoglobin (HbR) in different brain regions. fMRI picks up neural activity indirectly because brain activity uses oxygen, and therefore alters HbR. Now the changes that fMRI picks up last around 6-12 seconds... in other words, a neural activation "peak" could easily be confused with one of those 0.1 Hz waves. If that's not bad enough, these waves would be especially harmful for functional connectivity fMRI. If these 10-second waves extend over large chunks of the brain, they might look very much like a coherent pattern of activation. Nightmare. However... let's not panic yet. The 0.1 Hz cycle that Rayshubskiy found, remember, did not involve deoxyhaemoglobin at all - it was a change in oxygenated blood. Which makes sense, because that's the kind of blood that arteries carry. So one wouldn't expect fMRI to be affected, at least not directly. Phew! However... actually, Rayshubskiy et al claim that 10-second cycles do show up on fMRI (though they don't try to explain it.) Here's their fMRI data from the same patient who got the brain camera:

This data was recorded using an standard fMRI sequence, with a time resolution of 2 seconds. A 0.1 Hz wave is seen in the areas they show, but I do worry that they might have selected those areas precisely because they show that. They say

...manual inspection of voxel time-courses [was used] to identify the ROIs and corresponding time-courses shown in Figures 4D, E and F.

Which sounds a lot like the old fMRI 'voodoo error' i.e. cherry picking brain areas that fit your model (perhaps by chance). So what I'm saying is, this fMRI result might be voodoo... and that would be good news for fMRI. Rather ironic. Luckily, it should be easy to try to replicate these results, because the Rayshubskiy fMRI protocol was a standard one. There are hundreds of neuroscientists who could reanalyze some comparable existing data, and look for 0.1 Hz oscillations. If they don't show up, the 10 second waves would still be an interesting physiological phenomenon, but one that fMRI users might be able to safely ignore.