fMRI: A Result That Could Make Neuroscientists "Gasp" In Surprise

Many fMRI studies of brain activity could be confounded by the pattern of the participants breathing. In

, Dutch neuroscientists Willem Huijbers and colleagues show that peoples breathing cycle tends to get synchronized (phase-locked) with the appearance of stimuli during cognitive tasks. Because the respiratory cycle is known to affect the fMRI signal, this is a worrying result, as it suggests that some 'brain' activations and deactivations recorded in fMRI studies may in fact reflect breathing. Huijbers et al used a memory task in which participants are shown words, during the fMRI scan, and later have to try to remember them. It's well known that brain activity differs between words that are later recalled (R) and those that are forgotten (F). The difference, reflecting memory encoding, is seen in two main brain areas. In the ventrolateral prefrontal cortex (VLPFC), activity is higher for remembered words but in the posterior default mode network (DMN), it's lower in response to words that get recalled. The current study replicated these findings. However, Huijbers et al's results show that it might be breathing, not brain function, that accounts for most of the DMN's contribution to memory. They show that participants breaths tend to phase-lock to the appearance of words, and crucially, that breathing is more tightly locked to subsequently remembered words: this graph shows that on average participants take a breath 2-4 seconds after a word appears, especially for remembered words. If there were no phase-locking, the line would be flat.

We know that the respiratory cycle affects the fMRI signal, and that the DMN is especially prone to respiratory effects (for anatomical reasons). A second aspect of the study provides more evidence for this. At certain points during the experiment, Huijbers asked participants to hold their breath for several seconds. During this time, the stimuli words kept appearing on the screen. Clearly, if you're holding your breath, your breathing cycle is not phase-locked to anything. So it's remarkable that, while memory-related activity in the VLPFC (orange) was unaffected by breath-holding, the magnitude of the posterior DMN remembered-vs-forgotten effect (blue) was much smaller (65% lower) during the breath hold: 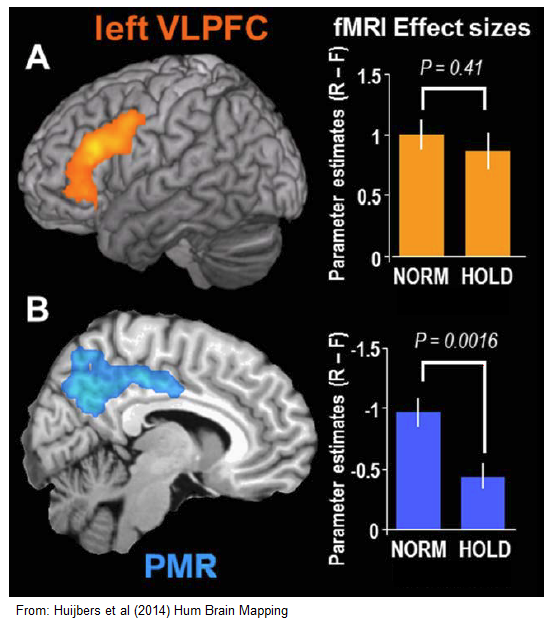 Altogether this is pretty strong evidence that breath cycle effects could be responsible for much of the task-related DMN deactivation. Huijbers et al did find some memory-related deactivation in that region, even during breath holding, so there does seem to be a real neural effect there as well. But the majority of the signal was respiratory in origin. Nothing here should come as a huge surprise to neuroscientists, as the impact of breathing on fMRI has been known for a long time. But many people assume that in the course of an experiment, breathing effects will cancel out, especially when the experiment uses an event-related design with different stimuli appearing every few seconds. Surely, neuroscientists have told ourselves, breathing won't phase-lock over such a short time-scale? After reading this paper, it's hard to feel so confident. (Although I wonder if the presence of breath-hold periods might have encouraged subsequent phase-locking by disrupting the 'natural' breathing cycle?) Huijbers et al conclude that

These findings clearly show that it is critical to incorporate respiratory measures in fMRI analyses to account for respiratory/vascular effects, even when using fast event-related fMRI designs.

Luckily, measuring breathing is pretty easy - you just need a detector belt placed around the chest. Most MRI scanners already have the ability to do this, in fact I believe that the belt comes free with the scanner in many cases. So there's no excuse for not using them. As to why we tend to unconsciously phase-lock our breathing to stimuli, this remains unclear. But we've all experienced it: we've all gasped in surprise, or felt a moment take our breath away. It seems that those are only the most extreme examples of a general phenomenon.