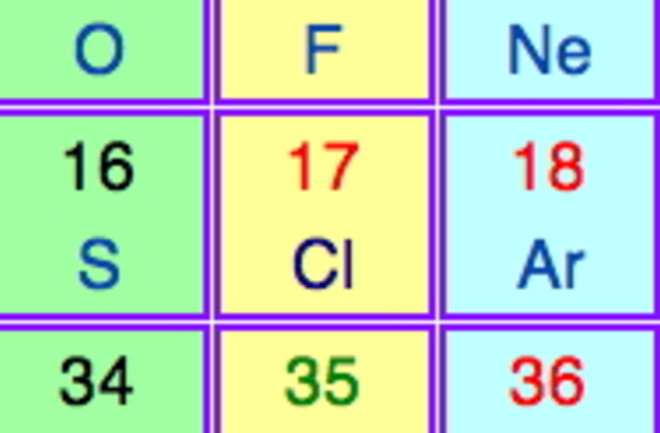 Fluorine and chlorine. From the Periodic Table of Elements. Element No. 17 is a deceptively simple-looking atom, crucial to life and yet capable of snuffing it out in an instant. Its name is chlorine. Added to municipal water supplies in traces of up to 4 parts per million, it is responsible for practically eliminating cholera, typhoid, and other scourges from much of the developed world. Chlorine gas, on the other hand, has been used as a weapon in chemical warfare. As Paracelsus put it: "All substances are poisons. . . . The right dose differentiates a poison and a remedy." Sitting directly above chlorine in the periodic table is an even simpler element: No. 9, or fluorine. Like chlorine it is a member of the halogen family and occurs naturally in the water and minerals of the earth. In its ionic form, fluoride, it can be added to drinking water in traces of about 1 part per million to improve dental health, especially among children in poor families who are not getting consistent care. There is a genuine debate over just how necessary water fluoridation is for the general population now that it is widely added to toothpaste and other products. But the only established downside is that during infancy and early childhood, too much fluoride might raise the chances of harmless, barely visible white spots called fluorosis. Uglier staining is only a problem with the extremely excessive amounts of fluoride that mostly occur naturally in some wells and community water systems. That is why public health and environmental officials recommend a maximum concentration as well as a minimum. I have found no reports of anti-fluoridation crusaders demanding public action to remove natural fluoride from their water. The enemy they most fear is not this particular halide but the government and the scientific establishment. That would have to include the Australians -- their National Health and Medical Research Council concluded in a review of the scientific literature that fluoridation is safe and effective -- as well as the Europeans. The most recent and extensive review of the research was by the European Commission's Scientific Committee on Health and Environmental Risks. It found no conclusive evidence linking fluoridation to osteoporosis, osteosarcoma, thyroid disease, or brain damage -- the specter raised and mostly dismissed (with a twinge of uncertainty) by the recent piece in Slate. Instead of fluoridating water, European countries more often choose different avenues. A Q&A on the website of the Pew Charitable Trusts gives a good summary:

. . . at least 70 million Europeans consume fluoridated salt, and this method of fluoridation reaches most of the population in Germany and Switzerland. These two countries have among the lowest rates of tooth decay in all of Europe. Fluoridated milk programs reach millions of additional Europeans. A number of areas in Italy have water supplies with natural fluoride levels that already reach the optimal level that prevents decay. This is a major reason why Italy does not have a national program for water fluoridation. Finally, some countries in Europe do elect to adjust fluoride levels in community water systems. Fluoridated water is provided to 12 million Europeans, mostly reaching residents of Great Britain, Ireland, and Spain.

There are probably historical and sociological reasons for the different national approaches. I would love to hear from anyone who can point me in that direction. For all the good science out there, it is swamped by misinformation -- globs of pernicious memes spread by the amplifying effects of the Internet and the populist bias of the Google search algorithms. A study published in an Australian and New Zealand journal, When Public Action Undermines Public Health: a Critical Examination of Antifluoridationist Literature, came to this conclusion:

Extremist arguments find fertile ground among disenfranchised, psychologically disturbed, and alienated individuals. A subculture has now developed around and for such people who are believed to find psychological gratification in imagining themselves heroically in the possession of such secret and 'subversive' information. . . . The situation whereby a small group of determined individuals can manage to deny half a century of science pays testimony to the power of emotional arguments and the potential of misleading propaganda.

Depressing as it is, I'll probably return to this subject. I've been fascinated by conspiracy theories ever since I wrote my first book, Architects of Fear. Meanwhile I will leave you with this cartoon from 1955. It shows that from the beginning, fear of fluoride was accompanied by vaccine paranoia and a certainty that mental (not just dental) health programs were part of a Communist brainwashing plot.

Flyer attributed to the Keep America Committee. Wikimedia Commons. __________ This is part 2 of what has become three posts: