First they see what we see, then it's The Matrix. 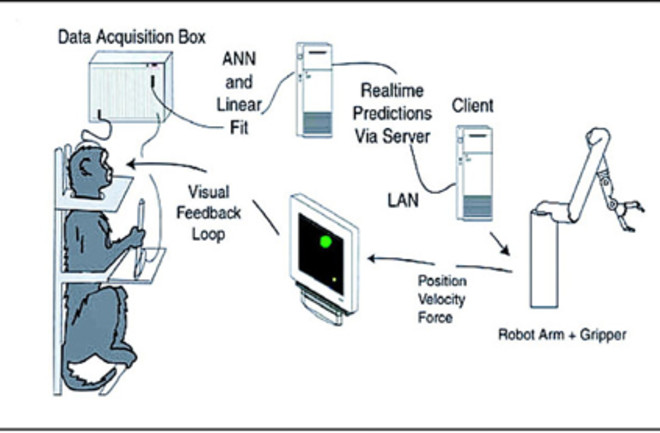 These things always start small: First someone programs a computer to read minds, and next thing you know it'll be Eternal Sunshine of the Spotless Mind, and we'll all be erasing unpleasant memories. And how long a step can it be from there to the trippy I'm-in-your-mind sequences from The Cell, or even, dare I say it, The Matrix itself? And the mind-reading computer that starts it all? We're getting there. Researchers have already been able to train monkeys to control robot arms via monitored brain activity, but having a machine that can decipher more complex thoughts took a big step forward with this recent news from Japan: Yukiyasu Kamitani has figured out a way to use fMRI technology to see what you're seeing. The process is still crude: the subject's brain waves are calibrated first by staring at various objects. Later, the subject is shown completely different objects, and Kamitani's device can redraw an image of them on the screen. Kamitami's team successful read the word "neuro" from a subjects' thoughts. It only reads black and white images now, but Kamitami told NewScientist.com that he expects to eventually have the ability to video tape dreams. Kamitami is not alone. The U.S. Army has budgeted $4 million for "thought helmets" that would allow soldiers to deliver orders telepathically. they expect to need several decades to achieve their goal, but the plan right now is to enable soldiers to think information have the helmet read the information, radio it over to another helmet, and transmit into another soldiers' brain. A gaming company called Emotiv plans to release a thought-reading helmet that would allow players to work through a mystical world just through their mind. The device functions by reading tiny changes in the electrical state of the brain caused by neurons firing. Emotiv's website says players will be able to manipulate objects by thought, the game's environment will respond to players' emotional state, and creatures will react to facial expressions. There's a pretty nifty demo video on their website as well, in which a developer operates a wheelchair through facial expressions. They expect to have a version released for next summer, so we'll see then if this is vaporware or not. All of these devices point to the enormous advances scientists are making in decoding brain waves. What had been a dense mix of confusing signals is slowly getting broken down into smaller, more comprehensible parts. And once we can read the electromagnetic signals sent off by our brains, translating those signals to a computer is the easy part. But if computers reading brain waves isn't sufficiently chilling for you, consider this: Just two years ago, the scientist connected a neuron to a microchip directly. Who needs to scan brain waves if the computer is already in your head? Image from the Public Library of Science, Biology.