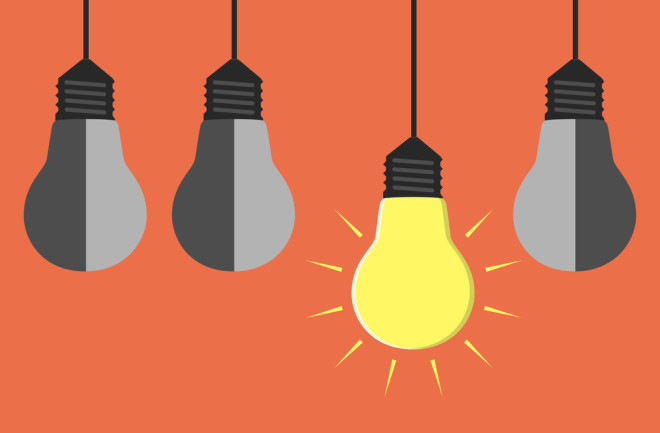 (Credit: Dmitry Guzhanin/Shutterstock) You've likely seen some version of the scenario on television or in the halls of a university: A researcher runs out of the lab in a frenzy, electrified after suddenly arriving at the solution to an impossible problem. "Eureka!" These "aha!" moments are supremely satisfying, whether you're a scientist, a hard-bitten detective or an unlucky horror movie actress realizing that something's just not right. But what happens to us in the moments just before the light bulb turns on? New research from Ohio State University suggests that our gaze broadcasts moments of inspiration before we even realize a solution is close at hand. By tracking people's eye movements as they tried to figure out the best strategy to win a simple game, the researchers found that our brains piece together bits and pieces of the puzzle without us necessarily being aware of it. Only when the relevant information reaches a critical mass does it break through in a rush of understanding.

Wei James Chen and Ian Krajbich had 59 students challenge an opponent in a game that asked both to choose a number between 0 and 10, a scenario that was repeated for 30 rounds. They weren't given criteria for winning beforehand; instead, participants had to solve the game themselves. Here's the secret: If players chose a lower number than their opponent, they were guaranteed to win. They could either make a new choice every time or lock in a single number to use for the rest of the game. In this scenario, choosing 0 was obviously the best strategy, and the researchers considered players to have reached an epiphany if they chose that option. It turned out that around 40 percent of the players eventually chose to lock in 0 as their choice, meaning that they had figured out how the game worked. Thirty-seven percent of participants locked in a higher number, and 20 percent never did, suggesting that they hadn't learned the right way to play. They published their findings Monday in the Proceedings of the National Academy of Sciences.

By tracking where the participants' eyes wandered as they considered their choices, researchers hoped to gain insight into their decision-making process. They found that the eyes of those who committed to 0 wandered toward lower numbers in the turns preceding their final decision to hit the "Commit" button and lock in 0. Winners also took more time to think about the outcome of each match. However, winners didn't eye up the "Commit" button in the rounds before they chose to press it. This was crucial information, because it suggested to the researchers that their decision to press the button came to them all at once, instead of mulling the option over for a few rounds. In other words, they had experienced a eureka moment. Among those who committed, Chen and Krajbich also found greater levels of pupil dilation, something that has been associated with learning and uncertainty in previous studies.

The takeaway here, according to the researchers, is that eureka moments aren't actually instantaneous, it just seems like they are. Our brains are actually working methodically behind the scenes, putting together the puzzle pieces. Only when they have enough information to make a solid case do they present it to us, and we get the impression that we've been struck by the proverbial lightning bolt. Of course, some of the people that did commit chose a number that wasn't 0 — they were wrong. Although they too may have experienced a flash of insight, their instincts were off base. Not all epiphanies are created equal. Among those who did commit to a number, some made the choice immediately, while others held off till near the end, indicating that epiphanies come to some of us sooner than others — although they may not always be right. In addition, some of those who didn't commit could have still figured the game out, but they did so without the certainty that a moment of epiphany conveys. While this research provides a glimpse into an "aha!" moment, it's not exactly clear how information is sorted in the brain to arrive at a seemingly sudden breakthrough moment. These researchers may not have arrived at their "Eureka!" moment, but they might be building up to it.