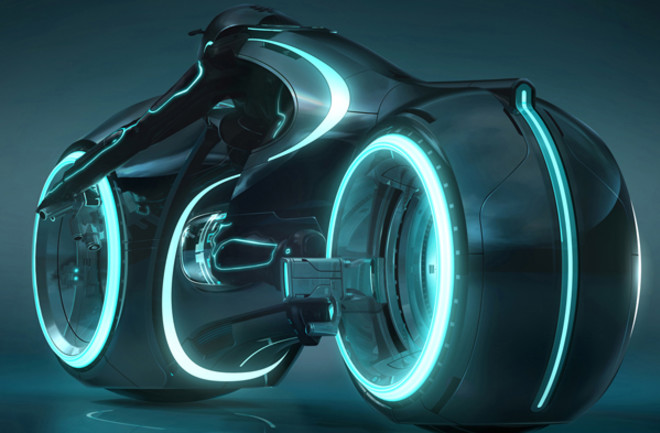 It's been 28 years since Jeff Bridges fell into Tron and its amazing 1980s computer graphics. Now the Tron universe is back with the new movie Tron: Legacy, out December 17. Here's the extended version of our interview with director Joe Kosinski from the December issue of DISCOVER, in which the first-time feature film director talks about reinventing the light cycle, building suits with on-board power, and how time passes in Tron compared to the real world.

Why return to Tron

, and why now? The original Tron was conceptually so far ahead of its time with this notion of a digital version of yourself in cyberspace. I think people had a hard time relating to in the early 1980s. We've caught up to that idea—today it's kind of second nature. Visually, Tron it was like nothing else I'd ever seen before: Completely unique. Nothing else looked like it before, and nothing else has looked like it since—you know, hopefully until our movie comes out. How did you think about representing digital space as a physical place? Where the first movie tried to use real-world materials to look at digital as possible, my approach has been the opposite: to create a world that felt real and visceral. The world of Tron has evolved [since it's been] sitting isolated, disconnected from the Internet for the last 28 years. And in that time, it had evolved into a world where the simulation has become so realistic that it feels like we took motion picture cameras into this world and shot the thing for real. It has the style and the look of Tron, but it's executed in a way that you can't tell what's real and what's virtual. I built as many sets as I could. We built physically illuminated suits. The thing I'm most proud of is actually creating a fully digital character, who's one of the main characters in our movie.

What did you keep from Tron, and what evolved?

The central one in that whole equation is the character of Kevin Flynn, played by Jeff Bridges. For me, that was the first thing I did in getting the project going—securing Jeff's commitment to be involved, to continue the character of Kevin Flynn to bridge the gap between the original and ours. We brought back Clu, Jeff's avatar. Kevin F is now 60 years old, where Clu is frozen at 35 years old. But to expand on that, we've introduced Sam Flynn, who is Kevin Flynn's son. He's really the character the audience meets first, and we follow his journey as he goes back into the computer to look for his father who disappeared 20 years ago. What else did the original directors want to do, but couldn't, that you had the ability to include? One thing that turned out to be special about our film is illuminated suits. All our suits are self-powered and self-illuminated, so you never have to fake light when two characters get near each other. They can illuminate each other's face and reflect in the floor and the wall around them, or light up a room when you turn the lights out.

Was it a huge hardware challenge to build those suits? Absolutely. You're talking about flexible light fabric, and everyone had to carry their own on-board power. It couldn't be a big bulky spacesuit—these are really elegant, thin suits that you had perform physical stunts in and wear comfortably.

With the advances in computing and filmmaking since 1982, you could do just about anything with Tron: Legacy. How did you keep it grounded?

I didn't want to make a movie about the Internet. That's kind of a trap. It can make your movie feel dated the weekend after it comes out. I really liked the idea that this was a closed-off system like the Galapagos Islands, where the simulation has been constantly evolving and growing on some server locked away in some hidden place. That way it felt more like a Western: The world is large and expansive, but at the same time, there's a code or a set of rules you have to follow. If you want to send a message to someone, you can't just beam it across cyberspace. You have to get on your light cycle and deliver it in person. You understand that there are repercussions in physicality that make it feel as non-virtual as possible.

To continue the analogy: If this is a digital Galapagos, what is the driver of evolution in the Tron

world? Kevin Flynn created a system that has the ability to evolve on its own. Today you read about these kinds of life simulations, where you program digital organisms that grow and mutate. It's cutting-edge stuff, but we're saying Kevin Flynn was such a brilliant, far-ahead thinking guy that he was experimenting in these new types of code that can do self-generation and evolution. Therefore it doesn't need maintenance and it doesn't need input from a programmer to change it. In doing so you can create a magical thing, but you can also create something that can get out of control. That's one of the themes at the heart of our film: Technology can be a very powerful and useful thing, but if not used correctly or if left unchecked, it can turn out to be a very dangerous thing as well.

Given that Kevin Flynn has been inside Tron

for 20-plus years, I would like to nerd out with the following question: Does time work the same inside the digital world as outside? No, it doesn't. In the first film they weren't very specific about it, but you got the sense when Kevin Flynn returned to the real world, very little time has passed compared to what he had endured. We've gone with a ratio of basically 50 to 1: for every 50 years spent inside the world of Tron, only one year would pass in the real world. If you're a user, or a human being pulled into that world, you track with what your age would be in the real world—that's why Kevin Flynn looks 60 years old in our film. But if you're a program, you remain the age you were when you were created. Therefore, since Kevin Flynn created Clu in 1985, when Flynn was 35 years old, Clu looked exactly like he did then. And in the 25 years since that moment, Clu hasn't aged at all. Programs are frozen in time.

How do you maintain many of the Tron

elements that seem fairly simple now, like the light cycle game, but keep it relevant in 2010? If you're talking about light cycles, for instance—that's something where I was able to sit with Steve Lisberger, the director and creator of Tron, and go back into the archives. On the original light cycle, the rider was meant to be on it and not enclosed in the canopy. But they just couldn't render that complex geometry, so they had to create that simple shape that covered the rider up. Knowing that fact, it was fun to go in with my design team and say, "All right, we want an external rider on the light cycle now that we can do anything. How do we maintain the original intent, but evolve the design from that classic shape?" It's pretty simple—the original is basically a 2D board where all you do is try to cut off the guy in front of you with these right-angle turns. We've taken the 90-degree restrictions away so they move like real racing bikes with big sweeping turns. And we've taken away the two-dimensionality of the game boards—now it's a multi-level game board with ramps that carry you up and down. Did you invent any new games, or just stick with the originals? We did invent some new ones, but I'm going to keep those to myself for now.

What did Tron get right about the future? And what do you hope to get right?

If you spend some time with Steve and talk about his goals for that first film and then [look at] our film, the one thing I think both touch on—and I think this is a good lesson to be learned in our society today—is the importance of maintaining human connection in an increasingly digital world. That's a strong element in our film with the connection between father and son. It's something that we all deal with every day, and struggle with—being able to unplug ourselves and focus on the people around us. It's easy to get lost in technology as it continues as it invades more and more of our lives. Images: Disney Enterprises