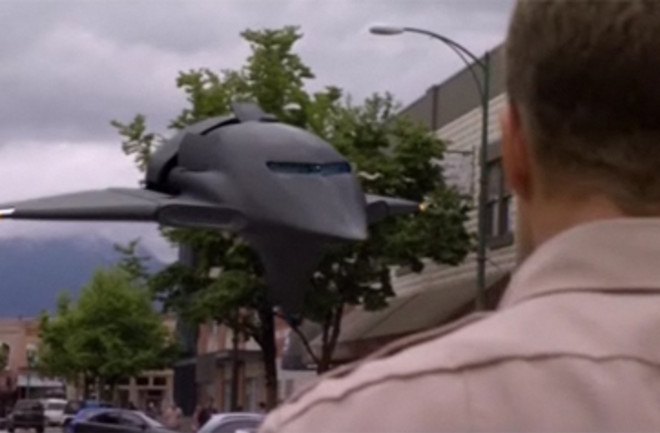 The new season of Eureka kicked off last night with an episode titled "Bad to the Drone," featuring a robotic aircraft that decides it doesn't like being on the losing end of weapons testing and decides to take a more active role. In a strong start to the season, it falls to Sheriff Carter to bring the irritable machine back to the nest. It's a timely episode as drones are very much on the military mind at the moment. Also known as unmanned aerial vehicles, or UAVs, drones have been around since World War I, but it's since the post 9/11 invasion of Afghanistan that they have emerged as a critical component of modern warfare. Initially, UAVs such as the Predator were used mainly for surveillance and reconnaissance, but it wasn't long before they were equipped with missiles for attack roles. Unlike Eureka's escaped drone, UAVs today are generally piloted remotely by a human being, although many do have an autopilot mode for things like crossing oceans. Increasing UAV autonomy is a focus of considerable research, especially for robots that could be used for search and rescue operations. Some would even like to borrow the tricks used by the common housefly, which manages to happily zoom around rooms and objects despite having a pinhead-sized brain. However, when it comes to robots actually firing weapons based on their own decisions, there's still considerable debate, and for now at least a human being must directly command a UAV to fire. Will this change in the future? My guess is that it will, with humans used as supervisors to step in and cease fire when needed, but probably at least one serious tragedy will happen before rigorous safeguards are enshrined in domestic and international law. What do you think?