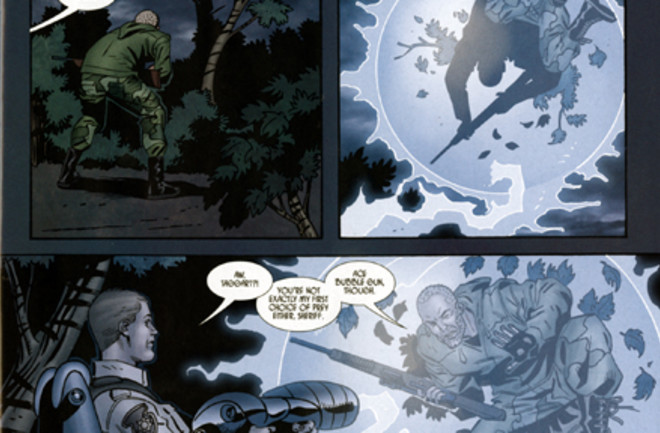 The second issue of the Eureka comic book series is out. Our favorite small-town-that-happens-to-border-the-government's-most-advanced-research-facility-sherriff, Carter, and his deputy, Jo, are continuing a manhunt. Because they are interested in taking their quarry alive, Carter is equipped with something he has taken to calling a "bubble gun." The gun immobilizes its target by shooting out a temporary force-field that forms a bubble. In the real world, bubbles—or more accurately, foam—actually are the basis of a gun designed to immobilize enemies. The real-life bubble gun belongs to a class of weapons known as non-lethal weapons. These are weapons that should, in theory at least, incapacitate a target without doing the kind of damage that a bullet produces. (There is controversy about these weapons, with some arguing that they are still pretty dangerous, but, because a police officer or soldier is told they can't cause serious harm, that officer or soldier is more likely to use such a weapon in situations where they otherwise would have shown restraint.) Tasers fall into this category, as are the kind of sonic weapons that have been used to repel pirates off the coast of Somalia. Somalia was also the location of the first active tests of the bubble gun in 1995, during the withdrawal of U.S. forces. The real-life gun doesn't rely on force fields, but instead shoots a sticky foam, which its creators describe as "an extremely tacky, tenacious material used to block, entangle, and impair individuals." Apparantly, the test went well, but the technology hasn't become widespread since because of concerns that the foam might accidentally or deliberately get sprayed on a target's nose and mouth, suffocating them. Still, foam-based technologies are very much under research, especially with regard to targeting the smallest enemies of all: pathogenic organisms and toxic molecules. Foams have been developed to neutralize bioweapons and nerve gas. Bioweapons are also emerging as a component of the current Eureka mystery, so we'll stay tuned for that. As for when we'll see Eureka return to our television screens, the current rumor has it returning in June or July.