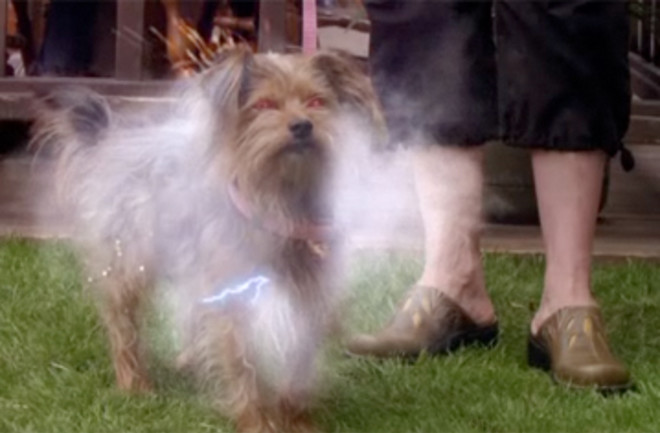 Last night's episode of Eureka, "Best in Faux," had many of the town's supersmart denizens trying to win a contest for the most lifelike robot dog. Despite an interest in more pressing matters, such as a potential volcanic eruption, Sheriff Carter is ordered to investigate why some of the robot entrants have experienced literal meltdowns. Robot dog competitions are taken seriously in the the town of Eureka. He shouldn't have been too surprised--similar robot competitions have a long (forgive the pun) pedigree. In the beginning, engineers competed to build the best fake mouse following a challenge in Spectrum magazine (disclaimer: I used to work at Spectrum. Hi guys!). The first Micromouse competition was held in New York in 1979, and the objective was to build a robot that could duplicate the classic ability of a laboratory mouse--solving a maze--in the fastest time. Micromouse competitions are still held today for high school and undergraduate students, but, in the end, running around the regular confines of a maze proved to be an insufficient challenge to really push the robotic state of the art. As a result, in more recent years, RoboSoccer has tried to take up the robot competition mantle. The ultimate objective is to build a team of humanoid robots that can beat a human team of soccer players in a real game. For now, teams compete with a variety of robots, usually of the smaller, wheeled, variety. There are some really tough engineering aspects to robosoccer--robots have to be able to work out where they are on the pitch in relation to the opponent's goal, work out where the ball is, identify opponents and team mates, and put it all together in some sort of strategy. There have even been actual robot dog leagues, where Sony Aibos have been reprogrammed to play soccer. And of course, the Big Kahanu of robot competitions have been the DARPA Grand Challenges. Since 2004 teams have been tempted to win big cash prizes and a lot of glory by creating autonomous vehicles that can drive themselves across the desert, or through urban traffic. Still, as impressive as these real-life robot cars are, they still aren't quite as pettable as Eureka's faux dogs.