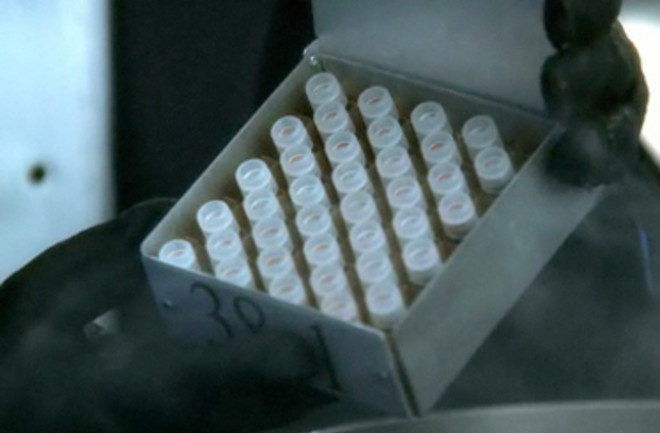 While last night's episode of Eleventh Hour never specifically discussed the ethical quandaries of a private company storing umbilical blood, but we get a pretty good idea of the writers' opinion when the owners of a cord-blood storage firm turn out to be corrupt stem-cell stealing scumbags. Naturally, Hood and Young sniff them out and they get busted in what I must admit was a pretty snazzy chase scene through the SoCal countryside, but they did it without ever discussing the questions raised by medical organizations about these companies. Cord blood is the stem-cell rich blood that can be extracted from an infants' umbilical cord shortly after birth. The blood holds the makings of full grown blood cells, and as such can be useful in helping to treat certain blood-born diseases and as a replacement for damaged bone marrow in certain treatments for cancer. Cord blood was first shown to be useful in 1988 when it helped replace damaged blood and marrow in apes. To provide a supply for research, the National Cord Blood Program was founded in New york in 1996. Even though some 6,000 cord-blood transplants have taken place between then and 2005, people receiving treatment with cord blood are considered human subjects of research and the treatment has to be certified by the appropriate boards. The public registry accepts cord-blood from anyone and will give it to anyone who needs it. On the other side are the private blood banks, of which there are several. These companies process and hold cord blood for the donor's or the donor family's future need. They charge in the neighborhood of $1,500 or $2,000 for collection and then $125 or so annually for storage. The firms market their services to parents both as insurance against many forms of cancer and because, as they say, the future of stem cells is bright. Here's a line from the Cord Bank Registry's argument: "Many experts describe the current time as an 'inflection point' in science and medicine and believe that individuals who bank their cord blood stem cells will be in a position to take advantage of the many developing technologies involving stem cells." This sort of language pops up all over CBR's website and others. But the American Medical Association and the American Academy of Pediatrics, while acknowledging the usefulness of public blood banking, worry that private cord-blood storage banks are exaggerating the usefulness of storage to nervous and easily persuaded parents. In a 2007 ethical opinion, the AMA noted that some of the claims of the blood banks to cure disease are overstated: a leukemia patient may not be able to use their stored blood, they write, because leukemia pre-cancer cells have been found in cord blood samples. Also, the blood from the umbilical cord would not provide enough stem cells to be useful for even a partially grown young adult, limiting the length of time for which the stored blood would be useful. They argue that while a child with a genetic predisposition toward certain blood diseases could end up using the blood at some point, a child who does not would only have a 1-in-2000 (.05%) chance of ever needing the blood. And even in 1999, a paper published in Pediatrics says that 76 % of patients needing a cord-blood transplant were matched through the public banks. The two patients on the Eleventh Hour might actually have a good case for cord-blood storage, though. We see a brother and sister both of whom have suffered from leukemia, which makes it seem reasonable to think their parents might have known there was a genetic predisposition for the disease, placing them into a high-risk bracket which might have justified the expense. The stem cells they saved wouldn't provide an instant cure, as the show depicts, nor would there likely have been enough for teenagers, but it would serve as a replacement for damaged bone barrow if certain extreme treatments are attempted. As for the claim that stem cells reverse aging in wealthy La Jolla yuppies, well, the AMA says there's no evidence for it. And I must say, I live in (the low-rent part of) La Jolla, and there are too many leathery old people for that to possibly be true.