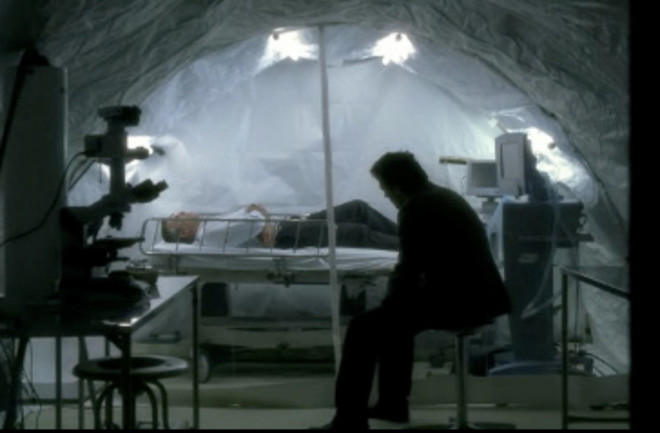 Last night's episode of Eleventh Hour was pretty straightforward: some smallpox germs escape from the private storage spot of a virologist whose doing some research on the side. Call him a mad scientist, if you like, but he felt really bad about his crime at the end, so he commits suicide by drinking a vial of his own super germs. Ick. Anyway, one of the keys to the drama of the episode was the question of just how fast smallpox would spread from person to person, and whether Jacob Hood, our intrepid scientist, and Rachel young, his compadre and handler, could stop the disease from spreading. It's not easy, because smallpox can be transmitted over the air, just by breathing within six feet of a victim. Contagion is even more likely if you touch the victim or for some reason exchange fluids. Alas, Young tries to capture a possible suspect by chasing him into the street where he promptly gets hit by a car. Young goes to check on him and gets blood all over herself. Straight to the containment area for her! The isolation area is actually the virologists lab, a level 3 research facility. The Centers for Disease Control classify germ research labs into four levels, with four as the absolute most strict. Even at level 3, where infectious diseases like small pox are studied, the containment measures are pretty hardcore: waterproof ceilings (for easy cleaning), one way air flow, and air locks at the entrances are all the norm. The requirements are so strict, that there are only six level 3 or 4 labs in the country. But they probably don't need such a sophisticated lab for this disease--just having people get treatment in a hospital, away from other patients would probably be sufficient. A British study from 2004 found that public health officials would need to isolate at least 90% of all smallpox victims to bring a potential epidemic under control. In this case, isolation doesn't mean putting them in special airtight chambers; just keeping them in the hospital and away from everyone else would do fine. This is actually pretty doable, because smallpox exhibits as a fever before it becomes really infectious. So as long as Hood and Young rounded up all the people exposed to the super germ and monitored them for a fever, they could probably save the city from some serious badness. The study also discusses how hard it is to contain the flu in comparison, because becoming symptomatic and infectious occurs nearly simultaneously. Making things worse, people who start to exhibit symptoms of the flu tend to soldier on through their work day before gong home and taking care of themselves. They may think of themselves as tough guys for finishing up work, but all they're doing is exposing all their colleagues to their disease. So next time you're feeling ill--don't be a hero, stay home!