Electric Fish "Plug in" and Turn Their Zapping Into Music 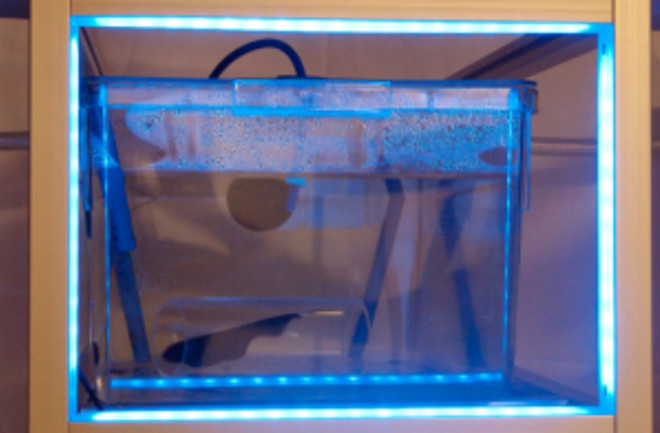 I’ve been on a short hiatus from blogging as my laboratory gets set to go to Eindhoven, Holland, for the STRP Festival, one of the largest art and technology fairs in Europe. We are putting the finishing touches on scale, an interactive bio-art collaboration between myself, visual/conceptual artist Marlena Novak, and composer/sound designer Jay Alan Yim, who together form localStyle. As is often done in biological work, my research at Northwestern University focuses on one specific type of animal---an electric fish from the Amazon jungle---which is ideally suited to uncover the answers to our research questions. These questions are chiefly in the area of how we take in information through our various sensory systems and control movement. We build biologically inspired robots based on what we find. These robots feature novel ways to sense and move that could be very useful for new highly agile underwater robots to help with things like monitoring the health of coral reefs or fixing an underwater oil spill. Our Amazon jungle fish are called “weakly electric fish.” These fish have evolved the remarkable ability to sense the objects around their body through a self-generated weak electric field (about a thousandth of a flashlight battery near the body). Think of them as underwater bats---like bats, they hunt at night, but instead of using sonar, they use electric fields.

A surprising demonstration of this ability is very easy to get with nothing more than a cheap powered speaker, like the type you would connect to your computer. By just dangling the input lead into a tank with one of these fish, you’ll hear a nearly pure tone (something like a tuning fork). The pitch of the tone that you hear depends on the species. Across the 180 or so species that exist, the tone frequency varies from about 30-1200 Hz, approximating the lowest B-natural on a piano to the D- sharp six octaves higher. In our interactive exhibit, twelve different species of these fish comprise a "choir" whose sonified electrical fields provide the source tones for an immersive audiovisual environment. Each fish is in its own tank with advanced filtration and water quality control, on tall frames that are arranged in semicircle around the podium. Using a modified Nintendo Wii-mote, participants can select the members of their choir, and then use a touch pad system to add real-time digital effects, generating a unique musical experience. We hope to foster wider public awareness of their valuable attributes and the fragility of their natural environment via this interspecies artwork. You can hear some of the tones that scale will generate from this short segment from Chicago NPR affiliate WBEZ.