I've been a fan of the Either/Orchestra for over ten years now, since first hearing them on a public radio station in Boston. This Cambridge-based jazz ensemble, a "little big band" in the tradition of the Mingus band, is one of my absolute favorite musical groups. (Whether the name is indebted to Kierkegaard is somewhat ambiguous.) Unfortunately, I moved away from Massachusetts soon after discovering their music, so I haven't had a chance to hear them live. Until, that is, this last Friday, when they played Chicago's historic Green Mill. Suffice to say, a decade's worth of expectations were not disappointed. 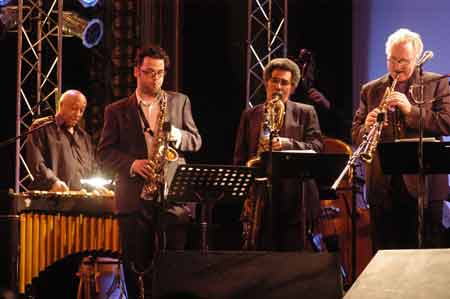 The singular genius of the E/O is to simultaneously stimulate the pleasure centers of the right brain and left brain in equal measure. They are a ten-piece group at the moment -- bass, piano, drums, six horns, and congas. Past configurations have varied, with personnel changing fairly frequently; distinguished alumni include John Medeski. But the spirit of the group has remained constant: sophisticated arrangements of eclectic music, played with an enthusiastic fervor that carries you along for the ride. Each of the band members is an accomplished soloist, and they work together in intricate configurations that certainly appeal to the intellectual side of one's musical appreciation -- but at no time could they be accused of being stuffy. Each song is generally constructed around a catchy hook, whose possibilities are thoroughly explored rhythmically and harmonically. These guys rock, groove, and swing. The E/O's repertoire has always been wide-ranging, from original tunes to classics by Monk and Ellington and Miles to quirky covers of pop songs from the Beatles and Dylan to -- wait for it -- King Crimson. In the last few years they have been heavily influenced by Ethiopian music, culminating in a recent live album from Addis Ababa. One of the songs performed Friday night will give you an idea of a "typical" E/O tune. It was a suite in two parts, both of which were influenced by the Azmari music of Ethiopia. The first movement originated when saxophonist/leader Russ Gershon became intrigued by the massinko, a kind of one-string violin played in Ethiopian clubs. He composed a Western-style string quartet ("of all things") inspired by this music, with the playful idea of getting classical musicians with incredibly expensive instruments to try their best to sound like cheap one-string violins you might hear in Addis Ababa. He later arranged the quartet for ten-piece jazz ensemble (don't ask me how you do that), to form the first movement. The second movement came from bass player Rick McLaughlin, who had taken Thelonious Monk's classic Well You Needn't and arranged it with a Azmari-style rhythm. And voila -- a suite that only the Either/Orchestra could possibly come up with, or for that matter perform. And it was beautiful. Besides getting the chance to hear the band play live, I finally had the opportunity to meet Russ Gershon, the founder of the group, in person. A few years ago I sent an email to their record label, asking to be put on the mailing list, and was pleasantly suprised to receive a personal reply from Russ himself. In my response I mentioned that he should let me know if he had any questions about cosmology; this led to a few back-and-forth emails, along these lines:

Well, yeah, it is kind of alarming, I have to admit. As you might guess from the date, our conversation was derailed by events. Still, jazz musicians with an interest in cosmology should be rewarded, don't you think? Maybe someday we will get a Dark Energy Suite. So go buy the records already. My first discovery was The Calculus of Pleasure, so I have a soft spot for that one, but they're all good. I arrived a bit early to the show to grab a good seat, since the Green Mill is always crowded. Naturally I grabbed some napkins and started writing equations, as one is wont to do -- six cocktail napkins were sacrificed, but for a good cause, as I figured out something important about auxilliary scalar fields. The bartender, Jill, noticed my scribblings and asked me what they were about. As it turns out, she is currently taking a class on differential equations, working toward her Master's degree to someday be a high-school math teacher. And she gave me a free glass of wine to demonstrate solidarity between we equation-oriented types. The guys sitting next to me also noticed, and between sets I ended up explaining dark energy and the accelerating universe to a bunch of jazz fans. See, another good reason to go to grad school in physics -- it opens doors in the most unlikely venues.