A neat little study has brought Inception one step closer to reality. The authors used fMRI to show that dreaming about doing something causes similar brain activation to actually doing it. The authors took four guys who were all experienced lucid dreamers - able to become aware that they're dreaming, in the middle of a dream. They got them to go to sleep in an fMRI scanner. Their mission was to enter a lucid dream and move their hands in it - first their left, then their right, and so on. They also moved their eyes to signal when they were about to move their hands. Unfortunately, only one of the intrepid dream-o-nauts succeeded, even though each was scanned more than once. Lucid dreaming isn't easy you know. Two didn't manage to enter a lucid dream. One thought he'd managed it, but the data suggested he might have actually been awake. But one guy made it and the headline result was that his sensorimotor cortex was activated in a similar way to when he made the same movements in real life, during the lucid dream - although less strongly. Depending on which hand he was moving in the dream, the corresponding side of the brain lit up: 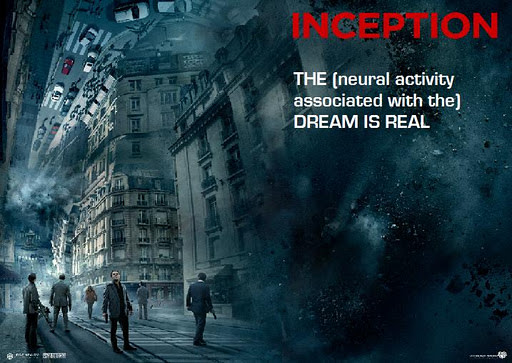 EEG confirmed that he was in REM sleep and electromyography confirmed that his muscles were not in fact being activated. (During REM sleep, an inhibitory mechanism in the brain prevents muscle movement. If the EMG shows activity this is a sign that you're actually partially awake). They also repeated the experiment with another way of measuring brain activation, NIRS. Out of five dudes, one made it. Interesting this showed the same pattern of results - weak sensorimotor cortex activation during movement - but it also showed stronger than normal supplementary motor area activation, which is responsible for planning movements. 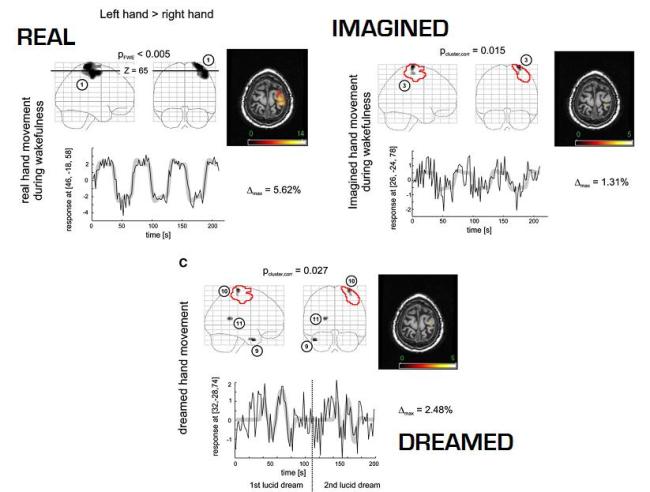 This is rather cool but in many ways not surprising. After all, if you think about it, dreaming presumably involves all of the neural structures that are involved in really perceiving or doing whatever it is you're dreaming about. Otherwise, why would we experience it so clearly as being a dream about that thing? It may be, however, that lucid dreaming is different, and that the motor cortex isn't activated in this way in normal dreams. I suppose it depends what the dream was about. That raises the interesting question of what someone with brain damage would dream about. On the theory that dream experiences come from the same structures as normal experiences, you shouldn't be able to dream about something that you couldn't do in real life... I wonder if there's any data on that?