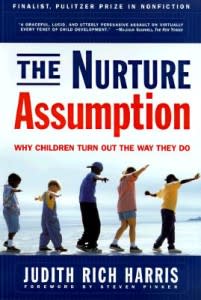 In 2002 I read The Blank Slate. With all due respect to Steven Pinker one of the most fascinating aspects of this book was actually a review of the work of another psychologist, Judith Richard Harris. Harris' own views are explicated crisply in The Nurture Assumption. In it she reviews and expands on a major insight from behavior genetics: over the long term parental influence seems to be a relatively marginal predictor in terms of many behavioral traits. To be explicit, one can imagine a personality trait which varies in the population. The variation of genes may explain 40% of the variation of the trait. The variation in parental child-rearing techniques, "shared home environment," may explain 10% of the variation of the trait. The remaining 50% of the variation may be "non-shared environment." That basically means we don't have a definitive explanation of what the 50% remainder is, though Harris posits that this consists to a great extent of peer groups.* However you quibble with the details of Harris' line of reasoning, the key takeaway is that people often neglect that parents and offspring share genes when considering the influence parents have upon their children. I think it is important to keep this reality in mind when reading pieces like in The New York Times, The Power of Talking to Your Baby. Basically, higher socioeconomic status parents talk to their infants and toddlers more, resulting in a larger vocabulary and presumably giving their offspring a head start. This is a really big deal, and I've started hearing about this nugget of wisdom a lot from friends. Providence, Rhode Island, is even spending $5 million dollars to shrink the "word gap." Social environment and enrichment matters. The Providence project is exactly the kind of local experiment that Jim Manzi recommends in Uncontrolled. But one of Manzi's points is that there is no silver bullet in many social science domains. Rather, there are lots of small incremental angles of improvement. And, it seems likely from the behavior genetic data that there are only going to be limited gains in terms of closing presumed intellectual gaps. A plausible, if unpalatable, possibility is that lower socioeconomic status families where there is little complex vocabulary exposure for children are this way simply because these families are disproportionately less intelligent. Adoption studies suggest that I.Q. can increase, at least up to adolescence, by switching a child from a lower (biological) to a higher socioeconomic status (adoptive). But the gap between the adoptive and biological children is not closed. The "word gap" is not going to magically transform the social landscape, though it may have an influence on the margins. Finally, I have to also be a killjoy and point out that these early life interventions often have a track record of diminishing returns. I am aware of the Perry Preschool Project, and I hope that that pans out, but looking into it it seems that the hopes of many rest on only a few cases. The reason that early gains are often extinguished is that people mature into unstable environments where their initial dispositions may lead them toward choices which prevent them from flourishing. If we're serious about intervention in the lives of the lower socioeconomic segments of the population we need to get serious in a Nordic fashion: cradle to grave. It seems to me that these periodic enthusiasms for a particular didactic technique reflect the reality that we're looking for a magical return-on-investment solution. There may be no such thing. * I am aware that this component may mask epistatic genetic effects.