Do You Know What's Good For You?

This post draws on the results of the controversial PACE Trial (2011), which compared the effects of four different treatment regimes for chronic fatigue syndrome (CFS). However, this post isn't about CFS. What interests me about PACE is that it illuminates a general psychological point: the limited nature of self-knowledge. Patients in PACE were randomized to get one of four treatments. One was called APT. People randomized to this therapy did no better, in terms of symptoms, than people assigned to the "do nothing in particular" control condition, SMC. However, people on APT said they were much more satisfied with their treatment than did the ones on SMC (85% satisfied vs 50%). Two other conditions, CBT and GET, were associated with better symptom outcomes than the other two. People in these groups were satisfied - but no more so than the people on APT, which, remember, was quite a bit worse. Here's the symptom scores: APT was close to the dotted line, meaning no effect: 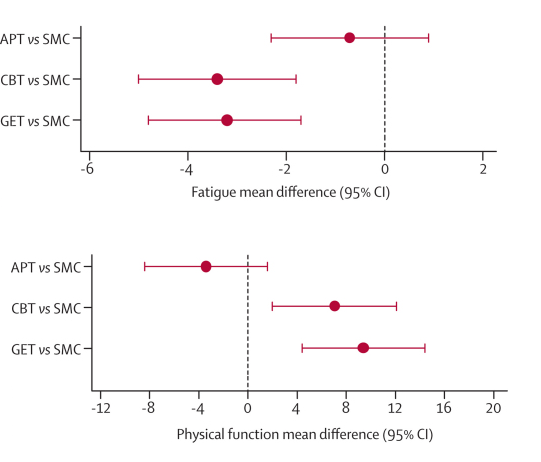 So satisfaction was unrelated to efficacy - even though it was the very same people judging both: the symptom outcomes were self-rated. "How could anyone feel equally satisfied with a treatment that works and one that doesn't work?", you might ask. But no-one got the chance to do that, because no patient was in a position to compare two treatments. They got one each. So they had no independent yardstick against which to measure the treatment they got. All they had was their own mental yardstick: their perceptions and expectations of what a satisfactory treatment should do (and if it does less, it's unsatisfactory). People in the APT arm evidently had a different mental yardstick to those in the two more effective treatment conditions, because they were all equally satisfied despite different outcomes. Why that might be is another story. We all have mental yardsticks as to what we 'should' feel, what is 'normal' as opposed to 'too much' or 'too little' in different situations. They're the barely-acknowledged foundation stone of modern psychiatry: psychiatrists use theirs to judge patients' minds, and patients use theirs to judge their own. But where do these yardsticks come from? And should we trust them?