paper, published in PLoS ONE a few weeks ago

, gives plenty of details about this pioneering educational initiative. But the main reason I'm blogging about it is so I can share this wonderful image - 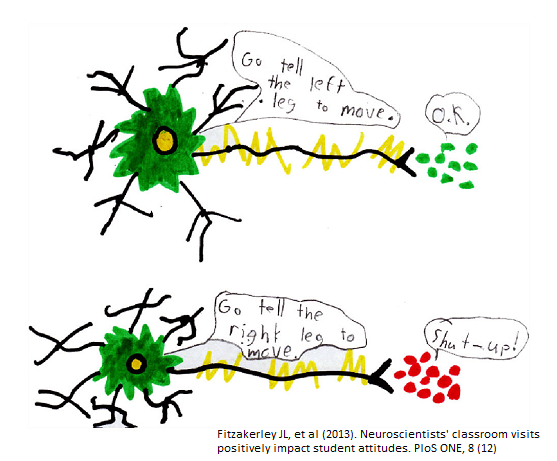 The authors of the paper say that it's a

Sample of Brain Awareness Program student work illustrating comprehension of the material. Concepts regarding neuronal structure, motor control and excitatory/inhibitory synapses, although presented separately, were combined into one drawing by the student.

Not bad for an 11 year old. Indeed it reminds me of my own creations. Hmm. But this is a serious topic, of course. In the UMinn Program, volunteers - who were mainly neuroscience staff and students - went into 168 Minnesota schools and gave 45-60 minute presentations introducing basic neuroscience concepts to classes of 10-to-12 year olds. Often, these presentations gave students the chance to see and touch 'real human or animal brains'. A survey revealed that touching the brains was the kids' favorite activity. Overall, children and teachers reported overwhelmingly positive feedback. In terms of student attitudes, however, the effects were mixed. Compared to before the program (2010), kids surveyed in 2011 reported liking science more, and considering it more fun. This is certainly a good outcome: there's a limit to how much you can learn about the brain in 60 minutes, but if you end up wanting to learn more in future, that's powerful. However, not all the outcomes were so positive. Students were barely, if at all, more likely to believe statements like 'I can get smarter' - a disappointment because one of the aims of the program was to communicate the idea of neuroplasticity - the changeable brain - and hence the malleability of intelligence. It turned out that the reason the program didn't do much in this regard was that there was no room for improvement: Minnesota children mostly already believed that they could get smarter if they tried. I wonder if that holds in other communities - or whether it would have been true 50 years ago...