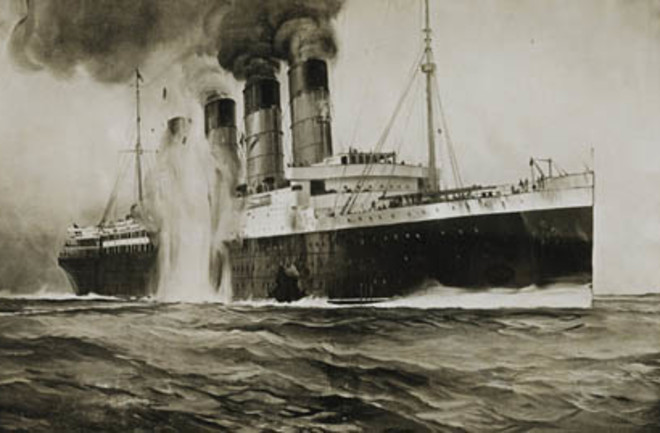 According to a new study in the Proceedings of the National Academy of Sciences, chivalry just depends on how much time you've got. That was the conclusion Benno Torgler and colleagues arrived at by studying two of history's most famous shipwrecks: The Titanic, where social norms seem to have prevailed and women and children had a better chance of surviving, and the Lusitania, where they did not. The rapid sinking of the Lusitania appears to have triggered the selfish instinct for survival in its passengers, while the slow sinking of the Titanic may have allowed altruism to reemerge. More than 1,500 people died when the Titanic struck an iceberg in 1912 and sank over the course of three hours in the freezing waters of the North Atlantic.

In their analysis, the researchers studied passenger and survivor lists from both ships, and considered gender, age, ticket class, nationality and familial relationships with other passengers. The differences emerged after a closer look at the survival rates [The New York Times]

The Lusitania took just 18 minutes to sink on 7 May 1915, torpedoed by a German U-boat just off Kinsale in Ireland, on a voyage between New York and Liverpool: 1,198 died, and it was literally survival of the fittest among the 639 who escaped [The Guardian]

. People between the ages of 16 and 35 had the best chance of surviving the Lusitania, the scientists say, not only because there was so little time, but also because the escape was hazardous and the lifeboats rocked violently. There are many confounding factors in a disaster, but Torgler argues that time was the key. With the Titanic sinking so slowly, he argues, social norms reemerged: Not only did women and children fare better, but upper class people were more likely to survive the Titanic wreck than the Lusitania, which devolved into a mad dash to the lifeboats. However, psychologist Daniel Kruger says that leadership could play a large role, too. The Titanic crew was more successful in maintaining order than the crew of the Lusitania.

"People might be in a state of panic, but if they are reassured there is a system in place, they might be more likely to go along with contingency plans," Kruger said [Los Angeles Times]

. The life-and-death drama of events like the Titanic and Lusitania provide researchers a window to further figure out how people behave under pressure.

Torgler and his colleagues are studying the reactions to more recent disasters — namely in the use of text messages, including those sent by people trapped during the World Trade Center attacks on Sept. 11 [The New York Times]