Did Michelangelo Hide a Brain Drawing in a Sistine Chapel Fresco?

What do you see in this detail from the Sistine Chapel frescos?

We'll give you a hint: Look at God's neck. Still can't see it? Take a look in a May issue of the journal Neurosurgery. What do a medical illustrator and a neurosurgeon see when they look at a Michelangelo masterpiece?

We propose that in the Separation of Light From Darkness, Michelangelo drew into God's neck a ventral view of the brainstem as well as the perisellar and chiasmatic regions. 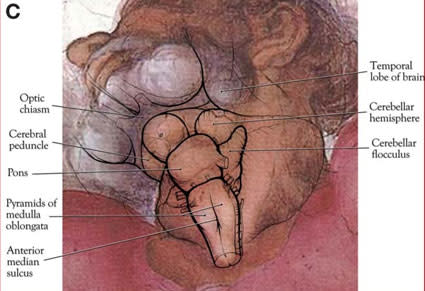 Though finding this hidden drawing seems to take a lot of squinting and genuine imagination, the article's authors claim that their beliefs have historical and artistic groundings. For one, Michelangelo was a master at dissecting cadavers, a hobby he started at age 17, the authors told NPR. They also point to the lighting, God's trimmed beard, and the fact that, as a neck, it isn't anatomically correct. For a brainstem, the authors think, it's just right. Some art historians aren't convinced. Brian A. Curran, an associate professor of art history at Pennsylvania State University toldThe New York Times:

“I think this may be another case of the authors looking too hard for something they want to find. . . I don’t want to discourage people from looking. But sometimes a neck is just a neck.”