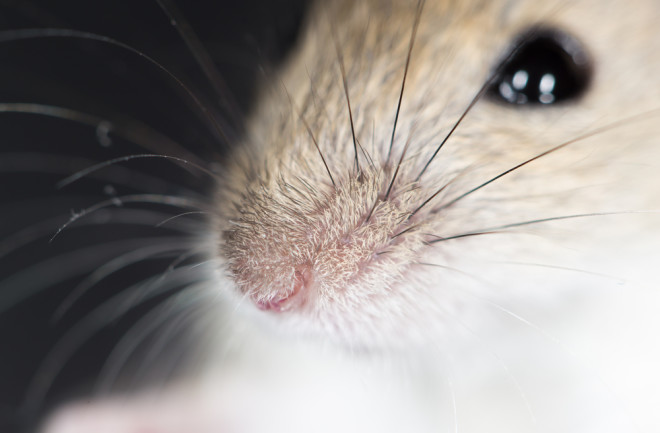 (Credit: Shutterstock) Researchers have genetically engineered mice to be super smellers, and they could one day be used to help detect land mines, diagnosis diseases or make perfume with just the right amount of musk. A team led by biologist Paul Feinstein of Hunter College in New York modified the genetic code of mouse embryos to produce mice with more neurons tuned to detect specific odors. Apart from homing in on targeted scents, the so-called MouSensor mice could also help answer basic questions about how humans smell. “Sense of smell is one of our most fundamental senses, and it’s really abysmal that in 25 years we still don’t know how it’s coded,” says Feinstein. “This could be the trick that gets us to understand.”

Decoding the Wiring of Smell

The 25-year milestone—to which Feinstein refers—is when researchers discovered a family of genes that code for odor receptors, located in olfactory neurons of the nose. Each gene codes for one type of receptor, which can only detect a limited set of odors. Signals from olfactory neurons ultimately converge in the brain, allowing us to experience an array of smells and the memories they evoke. What we don’t understand—and what MouSensors may reveal—is how the olfactory system is genetically programmed to wire itself. Mice have about 1,000 types of odor receptors, while humans have roughly 400. The types are distributed amongst millions of olfactory neurons, so that only about 0.1 percent of neurons have the same receptors, making the nose a “broad detector sheet,” says Feinstein. “The system is rigged so everyone has a fair shake at being expressed,” explains Feinstein. He sought to alter the odds, and “force the neuron to choose the receptor that I was interested in.”

Red fluorescence represents super-sniffer receptors connecting to the brain in the mouse olfactory system while the green fluorescence marks all other odor receptor populations. (Courtesy of Paul Feinstein) In MouSensors, Feinstein and colleagues added an enhancer gene that increased the number of neurons with specific odor receptors, above the normal 0.1 percent distribution. They created one line of mice that had 1 to 2 percent of neurons devoted to a receptor for acetophenone molecules, which smell sweet like jasmine. Another mouse line had 13 percent of neurons with receptors that could detect carvone molecules that smell like mint. The increased concentration of neurons altered the mice’s brains and behavior: Fluorescent imaging showed the extra receptors were indeed activating the correct neural pathway through the brain, and the MouSensors could smell the target odors at much lower concentrations than regular mice. The researchers trained both regular and MouSensor mice to avoid the odors by pairing them with injections of a chemical that causes “gastric malaise,” or stomachache. The mice were then given a choice between pure water or water laced with decreasing concentrations of the odor molecules. Compared to normal mice, the acetophenone-tuned mice were about twice as sensitive to the odors, and the carvone-tuned mice were about 100 times as sensitive. The team published its results Thursday in Cell Reports.

From Fragrance to Defense

The MouSensor technology—the ability to increase the number of neurons with specific odor receptors—has far reaching applications. The flavor and fragrance industry could use the mice to better understand odor detection and then design products more efficiently. The Department of Defense has funded the Feinstein group to develop super-smeller rats that could sniff-out explosives. MouSensors could also have important medical applications. Odors below the limits of human detection may signal that a person has a disease, even before symptoms manifest. “Every disease is going to change your body chemistry in some way … Can we create a platform to detect it and use it as a diagnostic tool?” says Feinstein. People who have lost their sense of smell—through normal aging or neurological disorders—often become undernourished because smell is integral to appetite. MouSensor technology may pave the way for restoring this vital function. Those possibilities are “just scratching the surface of what we can do,” says Feinstein. “We hope to make our dreams come true and decode human olfaction.”