Democrats & Republicans Don't Care Much About Each Other's Physical Distress 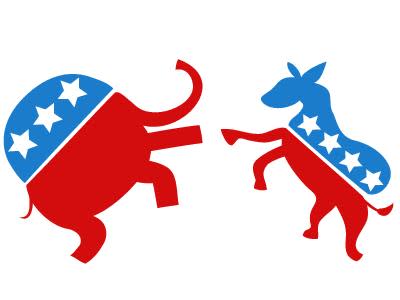 As we descend into another election year, it would be nice if we could remember that people across the political divide are, er, people too. Unfortunately, that's harder than it sounds, according to a new study

in Psychological Science. Democrats and Republicans both are less likely to empathize with people from the opposite end of the political spectrum. Psychologists know that empathy is often dependent on similarity. It's easier, for example, to empathize with Jack London's characters when you're reading about Yukon explorers

at a snowy bus stop than on the beach in Cancun. The researchers devised a clever experiment where students at a Michigan bus stop in January were asked to do a "reading comprehension" test. The short story they read, about a hiker who gets lost without clothes, food, or water, also inserted some clues to the hiker's political affiliations. In the follow-up test, questions about story details were mixed in with questions probing how the reader reacted to the hiker being cold. Students with political views similar to the hiker's rated the character as feeling colder than students with opposite political views (7.8 versus 5.5 out of 10). When participant and hiker shared political beliefs, 94% of students at the freezing bus stop said that the cold was worse than hunger or thirst for the hiker. When the same freezing students had opposing political beliefs, that number fell to 55%. The researchers also surveyed students sitting cozy in a warm library, and they found that political belief had no effect on how participants ranked coldness for the hiker. There are two different things going on here. When we share "visceral states"---in this case coldness---we feel another person's suffering from that visceral state more acutely than others. That's why the cold students were more concerned with coldness for the hiker. However, if that same cold student disagreed with the hiker's political views, he no longer empathized with the hiker's coldness. The empathy bump from "shared" coldness disappeared. The psychologists repeated this experiment with thirsty students instead of cold ones---they first fed them salty snacks---and saw the same empathy bump again disappear with opposing political views. They interpret these data as evidence that people have trouble projecting their own basic human needs to outgroups. For example, this may explain why it can be easy to neglect homeless people who are suffering from cold and hunger. Since the study was conducted among college students at University of Michigan, one limitation of the research is that there were relatively few conservatives; in the bus stop study, the total number of Democrats outnumbered Republicans 78 to 39. Why college campuses have that political tilt is a question for another study. [via TIME