Cured of the Rings

Some 20 million people in the United States have tinnitus, a chronic ringing or whooshing in the ears, and about 4 million of them experience such severe symptoms that "they wonder if they're going insane," says Martin Lenhardt, a biomedical engineer at Virginia Commonwealth University. The cause of the ailment is, in essence, a biological computer error. So Lenhardt has found a way to reprogram the brain and make the maddening sounds go away, temporarily at least.

When people lose the ability to hear very high frequencies— whether due to aging, disease, or exposure to loud noise— the neurons in the brain that used to process those sounds start to respond to a lower frequency instead. At the same time, those neurons may also increase how often they fire without any input, leading to phantom ringing. Lenhardt and his colleagues at the Martha Entenmann Tinnitus Research Center in New York City are reprogramming the neurons to proper functioning by exposing them to high-frequency vibrations.

The researchers place a quarter-sized piezoelectric disk behind the patients' ears, which sends the vibrations through the skin and into the temporal bone of the skull. Although these motions bypass the middle ear, they stimulate the neurons, which respond if they were once again being exposed to high-pitch sounds coming from the ear itself. Lenhardt uses music that has been modulated to high frequencies to guide the action of the disk, so that its vibrations have a pattern. "We wanted a rhythmic source, that wasn't too boring," says Lenhardt. Pulsed sound is also a better neural stimulator than steady sound, he says: "We think it has to pulse a little bit to be effective, or you're not paying attention to it." 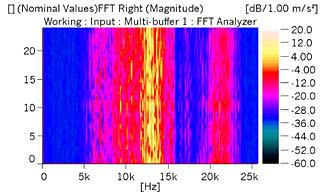 This audio spectrum shows, in yellow, the frequency range of the vibrations used to treat tinnitus. Courtesy of Martin Lenhardt.

After receiving two months of half-hour-long vibration sessions, conducted twice a week, most of the patients in a small pilot study said their tinnitus had vanished. Symptoms returned within two weeks, however, so Lenhardt expects that repeated sonic treatments will be needed to keep the neurons properly programmed. "But if you can do it in a non-invasive way and only need a little bit of time, this could be a real breakthrough for people who just go crazy with tinnitus," he says. His group has just received FDA approval for the device, called UltraQuiet.

Lenhardt and his colleagues are also working on Tactaid, a complimentary treatment that could relieve tinnitus symptoms immediately but that wouldn't provide long-term relief. Tactaid uses a very low-frequency vibrating disk to stimulate the muscles around the ear. In about a third of tinnitus cases, the symptoms seem to be influenced by a link between the brain's auditory system and the somatosensory system, which is involved in movement and automatic reactions. This connection makes a certain amount of sense: The phantom ringing of tinnitus is much like a type of phantom limb phenomenon, whereby a person can feel that his arm is moving, even when it is not, if the correct part of the brain is stimulated. Hearing is connected to the somatosensory system because some muscular movement occurs when we hear -- something that is more obvious in animals such as cats and dogs that can swivel their ears as they listen.

Tactaid's low-frequency vibrations stimulate the muscles around the ear, creating a signal that travels through the somatosensory pathways. Some of these pathways, in turn, connect to the cochlear nucleus, the part of the brainstem that is first to process sounds. The vibratory signal inhibits the cochlear nucleus, causing a cascade of neural reactions further up in the brain, which ultimately blocks the nerve impulses that people hear as phantom ringing. But as soon as the muscle vibration stops, the tinnitus comes back. Thus Tactaid is a bit like an aspirin for tinnitus, giving spot relief when the ringing is severe but not addressing the cause of the pain. The hope, Lenhardt says, is that Tactaid and UltraQuiet will address both halves of the problem, removing the symptoms right away while reprogramming the neurons in a way that will permanently cancel the ringing.