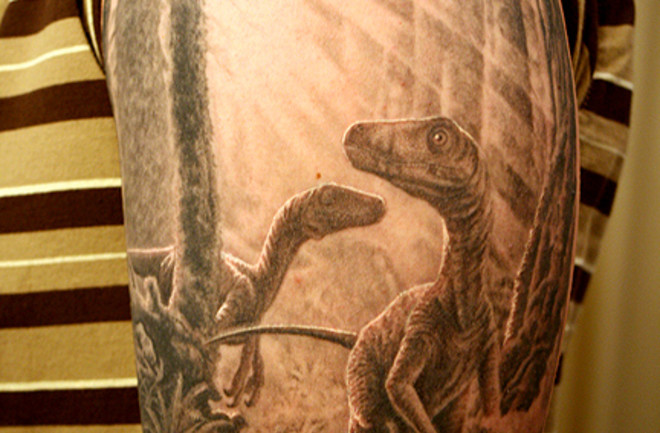 Jeremiah Drewel, a geology student at the University of Alaska writes, "This is my personal favorite Deinonychus!"

Carl: Deinonychus holds a special place in the history of paleontology. Its remains were first discovered in 1931 in Montana, but for decades they languished, unstudied, at the American Museum of Natural History. In the 1960s Yale paleontologist John Ostrom discovered a wealth of new fossils from the same species and began to contemplate what the animal was like in real life. At the time, dinosaurs were still widely considered to be sluggish scaly lumps. But Ostrom argued that Deinonychus was for more active, able to keep its stiffened tail straight out behind its body. He argued that they may have even been warm-blooded. Ostrom also noticed a number of similarities in Deinonychus's skeleton and those of birds. He revived an old theory that birds are dinosaurs, and argued they were closely related to Deinonychus. It's a connection now almost universally accepted by paleontologists.Deinonychus changed the way we see birds, but birds have also changed the way we see Deinonychus. Many relatives of Deinonychus--non-flying dinosaurs--show evidence of primitive feathers. Velociraptor, a close relative of Deinonychus, had what look like quill knobs on its bones. It's plausible that Deinonychus itself was covered in feathers of some sort as well, which it might have used to attract mates. Depending on what paleontologists discover in years to come, Jeremiah may need to get re-inked.